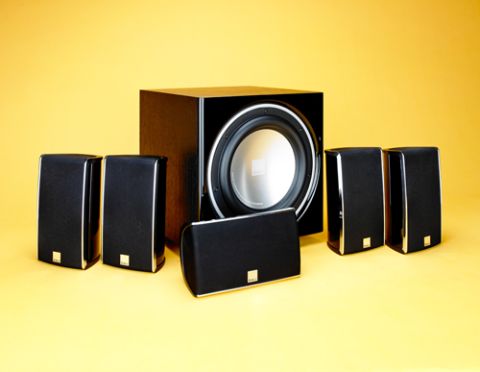 A reasonable speaker package to consider for a smaller room, but there are better options out there for less money

Dali might have thrown any regard for sensible spelling out the window when it came to naming the Fazon Mikro, but that’s about as rebellious as things get with the newest – and smallest – addition to Dali’s range of home cinema speakers.

They're a rather standard small-speaker design, albeit with a stylish twist in their curved, high-gloss shape with aluminium details. The cabinets contain a 10cm mid/bass driver and 20mm soft-dome tweeter and can stand upright as satellites or lie down flat for centre-channel use. They can be wall-mounted, too.

The new E-9F subwoofer that we used with the Mikro satellites uses the same 170W RMS class-D amplifier as Dali’s E-12F subwoofer, but features a new 9in driver in place of the E-12F’s 12in offering, and has a smaller cabinet as a result.

Set up is simple thanks to the speaker terminals being placed sensibly, and at the right angle, in the middle of each speaker’s back panel. Even though most people will have to do this only once, it’s nice for that one time to be trauma- and skinned-knuckle free, and shows Dali has learned some lessons from the rather tricky-to-set-up Fazon 3 system.

Stick on a Blu-ray of JJ Abrams’ 2009 Star Trek, and the Mikros produce a thoroughly listenable sound. It’s a lively and informative presentation, and sound spreads well between the satellite speakers.

The sub is nicely integrated and packs a good punch for its size. That said, it does need some careful calibrating to get the balance right. We found that in very bassy or complicated scenes there can be a tendency for things to lose a bit of control and sound rather tubby and unrefined.

It also delivers a relatively small soundstage, and can struggle to convey the scale of some explosions or gun fights in the same way as many of its rivals.

The Mikro’s price puts it on the back foot. It costs the same as the Award-winning B&W MT50 and falls down in almost every way in comparison. Even worse, it fails to hold its own against many cheaper rivals, too.

For example, it lacks a solid feel to its presentation, which makes it feel overall less convincing in its performance than other systems. The authority that we admire in the likes of the Q Acoustics Q7000i just isn’t there with the Mikro, meaning it can fall a little flat dynamically when it comes to building tension or excitement through a film’s music, for example.

This translates into voices as well. While they’re clear and direct, a layer of subtlety is lost that is present in more expressive and detailed packages like the Q7000is or B&W MT50s. This saps dialogue of the emotional impact displayed elsewhere.

While the Dali Fazon Mikro 5.1 speaker package is pretty good as a stand-alone proposition, placed in the context of a market filled with over-performing – not to mention chheaper – ,it falters.

There are much better ways to spend your money at this budget and below,