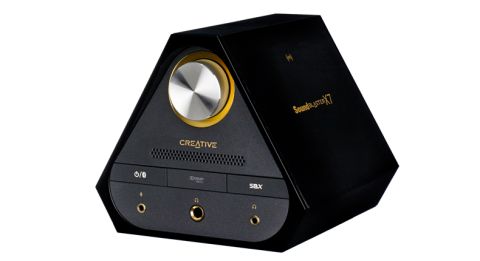 The Sound Blaster promises much but fails to shine. It’s a decent performer but is easily bettered by the likes of NAD’s D3020

We’re astonished at just how much Creative has packed into the Sound Blaster X7’s distinctive casework. It’s a digital-to-analogue converter and stereo amplifier but, intriguingly, also has Dolby Digital decoding built in.

Research the X7 and it’s clear that gamers are a priority, the unit’s features aiming to make the soundtrack of games more immersive and communication between players easier.

We’re curious about the Dolby Digital decoding. It works, of course, getting us a decent sound from Teenage Mutant Ninja Turtles (on DVD), but for home cinema fans we think Creative has been a little half-hearted here. The X7 won’t decode DTS soundtracks, and the high-resolution audio of Blu-ray is off the menu too.

You’ll also need external power amplification (or active speakers) for surround sound, and the line-level outputs are an odd mixture of RCAs for the fronts and 3.5mm for the surrounds, centre and sub. If surround sound is a priority we think a stand-alone receiver such as Yamaha’s RX-V377 (now down to £180) is a better bet.

We’re not wholly convinced by the Sound Blaster’s stereo performance either. Our review sample came with Creative’s upgrade power supply option. Going for the standard version will save £100 over the price we’ve quoted, but also results in a notably lower peak power into difficult-to-drive speakers.

Oddly, there isn’t much power difference between the two power supply options – the standard one is only a couple of watts down on the 22W-per-channel delivery of the upgrade option.

The on-board DAC is 24-bit/192Khz-capable. It can be accessed through a micro USB, if you’re using a computer, or optical if you want to connect a games console or DVD player.

There’s also a full-size USB 2.0 socket to connect Android and iOS devices, and it works without issue as long as you’ve also downloaded the X7’s app. Analogue users are catered for with a single RCA stereo input.

While we appreciate all that connectivity, we can’t help wishing the Sound Blaster X7 sounded better. It’s not terrible by any means, but it lacks the entertainment value suggested by its name and demanded by the price point. Remember, NAD’s excellent D 3020 has many of the Creative’s features (bar Dolby Digital decoding) and costs less.

We start off using our resident MacBook as source. The sound through a pair of Sennheiser Momentum headphones is tonally balanced and shows a decent degree of refinement. Detail levels are fair, but the unit is outclassed by something like Audioquest’s Dragonfly (£130) when it comes to outright resolution, dynamic expression and rhythmic drive.

We also try Grado’s more ambitious PS500s (£500) headphones to see how the Sound Blaster copes with something more ambitious, but the Creative doesn’t have the talent to make this a worthwhile exercise.

We try a range of files from Eminem’s Mockingbird (192kbps) to Hans Zimmer’s The Dark Knight Rises OST (24-bit/192kHz) and find that the X7 isn’t particularly fussy about genre. It’s listenable, reasonably articulate but not particularly insightful.

We try the X7 with speakers from Wharfedale’s Diamond 220s and B&W’s 685 S2s to ATC’s SCM11s, and the find the unit’s character unchanged. It’s a decent listen, but there isn’t much in the way of transparency or insight into the music. Even the upgraded power supply fitted to our unit fails to deliver the drive and dynamics the price deserves.

The dedicated app for the X7 (iOS and Android) has an impressive range of settings. Many of the functions improve one aspect of the sound at the cost of another.

The ‘SBX’ switch on the front panel improves clarity and punch but unbalances the sound tonally, adding an unnatural amount of bass to the proceedings.

The Creative Sound Blaster X7’s spec sheet promises much, but it doesn’t really deliver sonically. Our money would go elsewhere unless we could get one with a very hefty discount.