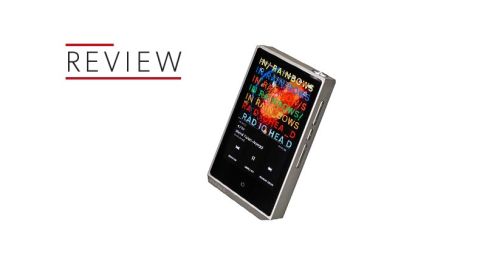 The Cowon Plenue R is a good product on the whole, but not one that tops the charts

There’s nothing quite as irritating as a younger sibling who does better than you in life – especially if they’re particularly smarmy about it. It’s as if the fact you’re older and usually bigger, makes you feel you should be inherently better.

That’s how we feel when we use the Plenue R, the bigger sibling of the award-winning £200 Plenue D portable music player.

In a straight race, the Plenue R beats the Plenue D; but pit it against its more expensive competition and this player falls short of receiving the same acclaim afforded to its younger relative.

If we had to sum up the design of the Plenue R in a word, it would be “sharp”. While many portable music players have similarly angular designs, most of them don’t look as striking or as clean as this one. The Plenue R looks like it’s been cut out of metal with a craft knife.

This is something of a double-edged sword – while it does give the Plenue R a premium look, when holding it, the bottom right point presses too sharply into the middle of your palm, making it a little uncomfortable to use. We’d recommend Cowon’s leather case for those with sensitive hands.

The Plenue R feels solid too, weighing in at 154g, it’s just a little heavier than an iPhone 8. On the left side is a slot for a 256GB MicroSD card, to boost the player’s 128GB of on-board storage.

This means it should comfortably store around 32,000 standard MP3 tracks, although fewer hi-res tracks, of which the Plenue D will support all the major formats like FLAC, ALAC, WAV (up to 384kHZ) and DSD128.

There are 3.5mm and 2.5mm outputs on the bottom, as well as a micro-USB port for charging, transferring data, and putting the player into its DAC mode for use with another music source.

There are the expected buttons for volume control and playback on the right – although they aren’t as responsive as we’d like – while on the top is an LED power button which changes colour from white to green and red to indicate the battery level on the device.

That’s a nice feature, letting you quickly glance to see the status of the player’s claimed 17-hour battery, rather than having to press a button and wait for a screen to turn on.

The Plenue R is straightforward to use and getting music onto the player is as simple as drag-and-drop.

Cowon has opted for a Linux-based operating system, rather than the Android one used by manufacturers such as Fiio and Astell & Kern, so MacBook users don’t have to go through the hit-and-miss middleman that is Android File Transfer.

However, we experience a few software bugs, where the unit doesn’t respond with the fluidity we expect. Hopefully these will be ironed out in a software update, but we expect a more reliable experience at this price.

On board is a 24-bit/192kHz stereo DAC (specifically, the Texas Instruments PCM5242), and for those that want to use Bluetooth mode, the Plenue R has aptX support too, providing a ‘CD-like’ (16-bit/44.1kHz) resolution.

Plenue has also included a few extra bells and whistles in the form of JetEffect 7, the company’s range of EQ settings that go from the conventional (Rock, Jazz etc) to the more niche (“Flange" and "Reverb Stadium”.)

Whether you use these settings is down to personal taste. The Rock mode, for example, can certainly make your music sound more exciting and punchy, but trades off detail and has a hard edge to it.

One omission here is streaming service integration. Other players have built-in Tidal (or other high-quality streaming sites) and it’s unfortunate that the Plenue R doesn’t offer the same convenience.

But load it up with music of a sufficient quality and the Plenue R will provide a satisfyingly detailed and clear sound.

We try it out with a range of headphones, from the Beyerdynamic Byron in-ears (£50) to the AKG K550 over-ears (£250), and the character remains consistent.

Beginning with Mozart’s No.24 Allegro (performed by the late Eugene Istomin), the Plenue R conveys a satisfying sense of space between the streaking strings and the deeper notes that lay the foundation of the concerto.

And when the trills of the piano begin, rolling up and down the scale, the Plenue R puts it front and centre.

It conveys a distinct difference in impact and intensity between the playful melody and the deeper, stronger, chords that reintroduce the strings into the composition. So far, so good.

Switching to Elvis Presley’s cover of Johnny B. Goode from his From Memphis to Vegas / From Vegas to Memphis tour, has a good deal of dynamism and energy that captures the vibrancy of the track. It won’t be long before your foot starts tapping along

Where lesser players might lose their grip trying to keep track of the rapid piano, guitar, vocals and sound of the audience, the Plenue R keeps each element well organised. When Presley’s guitar solo does start (accompanied by a cheer from the crowd) the Plenue R doesn’t muddle the details.

And in the deep end, the twangs of the bass guitar that ends Fleetwood Mac’s The Chain are weighty enough, while still maintaining a distinct shape.

The Plenue R offers layers of low frequency notes rather than one amorphous blob of bass. Vocals are convincing and well-balanced, able to project widely without ever sounding strained.

However, there are areas where we think the Plenue R could use some improvement, especially when compared to the class leader at this price range, the Astell & Kern AK70 mkII, which manages to provide a more nuanced sound across the board.

The AK70 has tighter timing, a deeper bass with a more distinct punch to it, and there’s a greater clarity in the midrange. Playing R.E.M’s Everybody Hurts, it draws your attention to the wobbles in Michael Stipe’s emotional, haunting vocals much more effectively than the Plenue R does.

It’s a similar story when in DAC mode; though it can easily dig up more energy and detail than our laptop’s in-built converter can muster, it falls short of providing the same experience that competing players do. It simply doesn’t have the same ability as a dedicated DAC such as the Oppo HA-2 SE (£290).

But for a little fine tuning, this player might have received a five-star review. There’s a lot to like here; a stylish design, an easy-to-use operating system and an undoubtably good sound quality.

However, each of these characteristics come with small niggles that, when considered as a whole, just bring it down – especially since its little sibling, the Plenue D, avoided all of these pitfalls. Yes, the Plenue R sounds better in comparison, but pound for pound the smaller player gives a better performance.

The Plenue R is a good product, and for the most part we enjoy using it. However, we were really hoping for something really great, and it falls short of being that.

Read all our Cowon reviews