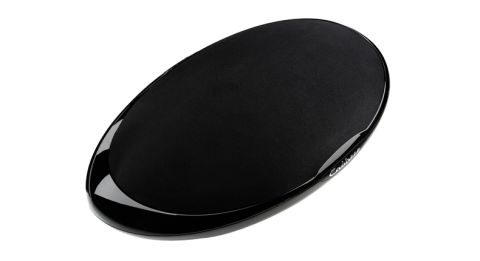 An almost-great system let down by mediocre software

We reviewed the Cabasse Stream 3 subwoofer/ satellite package last year, and we rather liked it.

We liked its specs and sound, but decided that the admirable hardware didn’t outweigh the frustrating control software.

Now we have the Stream 1 wireless speaker – and it’s basically the same story.

We’ll start with the hardware. Wireless speakers come in different shapes and sizes, but this one strikes us as a little odd – sitting somewhere between the boxy behemoth and the wacky.

It’s an odd shape, yet there’s something subdued - almost elegant - about it. The best way to describe it is ‘clam-shaped’: happy to lie flat, stand up, or be hung on a wall.

The body is made in a glossy plastic, which looks nice enough as long as you don’t examine it too closely. Most of the front is covered with cloth.

The back (or the underside, depending on how you look at it) features a large bass driver.

Connections are excellent. A USB port takes care of music from sticks and Android (although Apple devices proved buggy for us), while there’s aptX Bluetooth that can be connected by near-field communication (NFC).

Network capability comes from wi-fi, as well as a LAN socket, and there’s a 3.5mm input too.

Bluetooth takes care of music stored on a computer or portable device. Network connections use DLNA to fetch music from a networked storage drive or computer.

There’s also internet-based streaming, which gets you internet radio and Deezer. Just as with the Stream 3, the user experience is a mixed bag. It takes a while to get connected to our network, a task not helped by the game of ‘watch the blinking LED’.

Once we do that, we have to wrestle with a Cabasse Stream app that’s dated and counter-intuitive. The Stream app – free on Android and iOS - occasionally loses connection. Sometimes it freezes completely, although it doesn’t happen often.

It’s a shame the system is fiddly to use, because when it behaves the music is enjoyable – it’s a big, widespread sound, and nicely integrated.

There’s power, and high volume isn’t an issue. The dynamics are far-reaching and timing is good, which makes for a fun, expressive performance

We could do with a cleaner, more precise presentation though.

However, the Stream 1 is still engaging: sound is better with the unit lying down. When standing up, the midrange feels a little insubstantial – lay it flat, however, and the sound immediately has a lot more weight.

If you can’t (or don’t want to) do that, we’d recommend placing it against a rear wall.