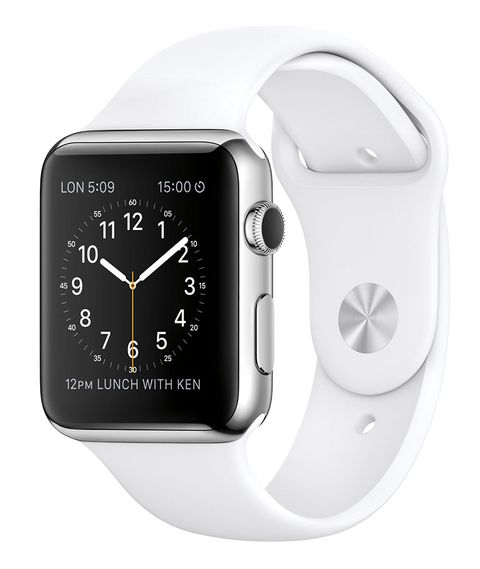 Now that Apple has (finally) joined the music streaming party, we decided it was a good time to give the Apple Watch a thorough workout. No doubt you will have read plenty about it elsewhere, but we wanted to find out just how good it is for listening to music, and whether it's as effective at controlling your home AV system as an iPhone or iPad.

So we got ourselves a 42mm Apple Watch with the 'Sports' rubber strap and have spent the last few days working out just what it can, and can't, do.

The set-up process is pretty simple. If you have an iPhone 5, 5C, 5S or 6/6 Plus running iOS 8.3 or 8.4 you will automatically see the Apple Watch app appear on your phone. Open that, and it will take you through a straightforward pairing process, although you will need both wi-fi and Bluetooth switched on.

Most of the time you will need the Watch paired and in the vicinity of your iPhone as the two are designed to work together, the Watch using its Bluetooth connection to hook up to the phone. But you can sync your iTunes playlists directly to the Watch when it's connected to its mains charger, up to a maximum storage capacity of 2GB.

That way you can listen to music directly from the Watch using a pair of Bluetooth headphones, or a Bluetooth speaker, if your phone is disconnected. It's handy if your iPhone suddenly runs out of juice or you want to listen to music on a run, say, without having to take the phone with you.

MORE: Everything you need to know about Apple Music

Using the iTunes app on the watch you can select your playlists, or choose from artists, albums or songs in your existing iTunes collection. The Watch hasn't yet had an update for Apple Music, so if you want to listen to Beats 1 radio or stream songs directly from Apple Music you'll have to do that from your phone.

But the iTunes app on the Watch will still allow you to pause/play and skip tracks, as well as adjust the volume.

We assume there will be an update for the Watch iTunes app as part of the watchOS 2 upgrade due this autumn, which will enable you to search for and stream music or radio stations directly via the Watch.

Whether you are listening to music stored on the Watch itself, or via the iPhone, the experience is seamless and sound quality reasonable. As we've reported elsewhere, Apple seems to be sticking to AAC 256kbps for its music service, although the bitrate may vary depending on whether you are streaming via wi-fi or 3G.

Listening to Amy Winehouse's Back to Black played directly from the Watch through the Sennheiser PX BT 210 Bluetooth headphones, the sound delivered is smooth and safe, but lacking in some detail and dynamics. It would be fine for listening while out on a run or doing a workout at the gym.

Using a wired set of headphones to listen to music directly from the iPhone achieved better results.

So what else can the Watch do? Well, it enables you to send music to any AirPlay devices you have, so we were able to stream the music we were listening to via Apple TV and a B&W Zeppelin Mini speaker dock. To do this, choose a song and then press down on the middle of the Watch's screen. A menu will pop up showing shuffle/repeat/source/AirPlay.

Select the AirPlay option and it will then show any devices it can find. Tap the one you want, and the music starts playing through that device.

Pressing the Source button enables you to choose between playback from the iPhone or the Watch.

And when connected to the Apple TV, the face of the Watch becomes a trackpad, so you can scroll through all the Apple TV menus and select what you want.

As regards other, non-AirPlay, audio systems there's no official Watch app for Sonos, for example, but we did find a third-party one called Kronos Connect on the App Store for £2.29.

This will connect with your Sonos system and allow you to select the different zones you have. Within each zone, you can then control playback with the usual skip/pause/play buttons and see all the tracks in your music queue.

However, we found the app somewhat flaky and prone to freezing, so you'd probably be better off waiting for Sonos to launch its own bespoke Watch app.

Sonos says Apple Music will be available on Sonos systems "later this year".

The Apple Watch has built-in Bluetooth 4.0 and 802.11b/g/n wi-fi connectivity. The former allows you to pair it with Bluetooth headphones if you are listening to music directly from the Watch. Alternatively you can stream from the Watch to a Bluetooth speaker - we used an Ultimate Ears Roll in the garden and it worked a treat.

It was fun to be able to wander around and adjust the volume of the Roll speaker directly from the Watch so we didn't upset the neighbours too much.

Full wi-fi connectivity, so you can use apps on the Watch independently of the phone, will follow with the watchOS 2 update later this year.

There has been criticism in some quarters of the overly complex nature of the Watch's multiple controls - the 'digital crown' for scrolling and zooming, the power button beneath it and the touchscreen watch face.

In our experience it didn't take long to get the hang of it, and after a day or two we found it became second nature. We were originally concerned about the relatively small screen - even the bigger 42mm version of the Watch looks smaller in real life than you expect from all the publicity photos.

But Apple seems to have designed the interface with its usual finesse, and even with larger fingers, tapping to select the correct app wasn't a problem.

Siri also seems to have been improved on the Watch. It has been updated to handle more music-based queries, so it's easy enough to ask it to play a particular song, album or artist and as long as it can find it, it will duly oblige. You just have to get used to not being self-conscious about walking around talking to your watch.

Another question mark hanging over the Watch is that of battery life. Apple claims a maximum of 18 hours.

In reality we generally managed a full day, from 7am to 11pm, without any problem. Yes, you will have to charge the watch every night, but having the small magnetic puck charger on the bedside table makes it easy enough.

There's a handy 'power reserve' mode which shuts down all the apps and other functions to keep the watch going if you're low on juice.

On one occasion, when we'd been using the energy-sapping fitness tracking app for three hours on the trot, the Watch was down to 10 per cent power and automatically asked if we'd like to put it into power save mode. We did, and a few hours later, the Watch was still displaying the time.

So unless you regularly stay up until the wee small hours, it shouldn't be much of a problem.

So the $64m question: do you need an Apple Watch? Simple answer, no. Like all Apple products it is beautifully made, does all sorts of clever things and is a big talking point with friends and colleagues. But it is expensive (the cheapest version is £299).

And in the context of listening to music on the go, or controlling your AV system, it largely mirrors what the iPhone already does.

Yet... not having to pull your phone out of your pocket every time you want to change track, adjust the volume or switch music source is appealing. It's surprising how quickly you get used to that. And being able to listen to music without having to take your phone with you on a run or at the gym is genuinely useful.

As more apps become available for it, and once it's fully integrated with Apple Music, that appeal could grow. And of course it can function as a fitness monitor, display your emails and tweets, send and receive messages, display your photos and much more besides. It isn't perfect, but it is very clever.