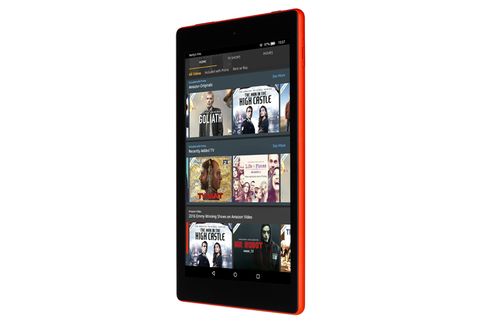 Needs an Amazon Prime subscription for the full experience, but even without Prime, you’ll struggle to find a better performing tablet at this price

Amazon has made successful attack on the affordable tablet market. With its numerous services perfect for a tablet audience, it certainly had good reason to.

The Fire HD 8, the line-up’s middle sibling, is not just better than ever but cheaper too, thanks to a generous spec boost and a £40 price drop.

This means 50 per cent more RAM for a faster performance, 12 hours battery life and twice the internal storage, with a choice of 16GB or 32GB plus support for up to 200GB more via microSD. Welcome upgrades indeed.

Elsewhere, it’s business as usual, but that’s no bad thing. As long as you’re happy to accept Amazon’s omnipresent eco-system, this is one of the best budget tablets you can buy despite some limitations.

The Fire HD 8 isn’t about to wow you with any attempts at flashy design.

At 9.2mm it’s a little chunkier than some of the more premium tablet options, with a textured matte plastic back panel, in a choice of black, orange, blue or pink - better than the shiny finish of the last generation.

It feels reasonably sturdy, despite the cheaper build. There’s a touch of flex in the plastic if really put under pressure, but nothing that’s going to bother you in use.

Buttons for power and volume run along its top edge (in portrait), which leaves them conveniently placed for landscape use.

The headphone socket and charging port are also here, with the microSD card slot hidden behind a flap on the right hand side.

It’s hard to expect more at this price, but it does mean you’ll have to manage your expectations when it comes to performance.

You’ll notice some noise around text, which isn’t as crisp as it could be, and the display isn’t able to show off as much depth and detail as an iPad mini 3, for example.

It goes decently bright for a budget slate, but we keep it towards the top end of the brightness scale, mostly because the colour palette is a little on the dull side.

Bright colours could certainly do with a bit more oomph, but where the Fire HD 8 lacks most is in contrast.

Blacks are wishy-washy at best and bright highlights haven’t got the power to punch through dark scenes with any sort of impact. This isn’t helped by slightly last gen screen tech.

Whereas pricier tablets have screen layers fused together to make content sit closer to the screen, the Fire HD 8’s display feels a little set back, which has affects vibrancy and contrast.

It’s really reflective too, so you might struggle a little in any sort of direct light.

It’s not a display that’s going to make the absolute best of your content then, but it will do the job better than anything else at this price – and by some margin.

Compare it to something like the Archos 80b or Yoga Tab 3, and you’ll get a brighter, more detailed picture and better viewing angles to boot.

If you’re wondering just how deeply the Fire HD 8 is tied into Amazon’s eco-system, it’s almost entirely. Even the lockscreen comes with Amazon adverts displayed on it (though you can order the ad-free version for £10 more).

Its operating system is based on Android, but it runs on Amazon’s own Fire OS user interface, allowing it to deliver a very Amazon-flavoured experience.

This means it looks different to any other Android interface, but is pretty easy to navigate round, albeit with a few quirks.

The homepage looks familiar, with a vertically scrolling list of all the pre-installed apps and any you download from Amazon’s Appstore.

Otherwise there are horizontal tabs, each dedicated to content, such as videos, music, apps and audiobooks. Each one is filled with curated Amazon content, with any non-Amazon content you add yourself hidden away in a different sub menu.

It’s difficult to get away from, and that’s why being a Prime member makes so much sense if you buy a Fire HD 8.

Much of the content being thrown in your direction is then free and ready for you to access, including Prime videos, Prime music playlists and Kindle Unlimited books.

It completely changes the experience, and is a worthwhile cost to add in to the price of the tablet.

Despite being based on Android, Amazon’s tablets don’t give you access to Google’s Play Store, which can limit you a little in your app selection.

Many Google services – like Drive, Docs and Google Chrome – are nowhere to be found, and you might struggle with new games taking their time to appear too.

It’s getting better though, and you certainly won’t struggle for video on demand and music streaming apps.

Compared to its predecessor, the Fire HD 8 comes with improved performance. The RAM boost to 1.5GB moves things along a little smoother, with the 1.3GHz quad-core MediaTek chip doing enough to keep wait times down to a minimum.

Heavy multi-tasking might slow it down a little, as will media-heavy webpages, but games run smoothly, Netflix streams load quickly enough and swiping around menus gives us no bother at all. At this level, there’s very little to grumble about.

We’re glad to see a boost in the onboard storage too, with the 16GB base model much more convenient than the 8GB of last year. It costs just £20 more to double that to 32GB, or there’s the microSD card slot, plus Amazon’s cloud storage.

The cameras on the HD 8 are the same as the previous version at 5MP and 0.9MP, and like most tablets of this price point, are really best avoided.

The main camera does a reasonable job with colours in good light, but there’s a real lack of sharpness and detail. Start to zoom and the absence of a decent lens and the low resolution becomes even more apparent.

As for the selfie camera, it’s soft and washed out, and you’ll need good lighting conditions for it to be usable. In fact, tricky or low-light conditions will scupper both cameras completely.

None of this is surprising at this price, and almost any decent phone out there is likely to beat them by some margin. We don’t mind – we’d rather take the RAM, storage and battery improvements than better cameras.

Musically, the Fire HD 8 could do with a little more bite, a bit more get up and go and much better timing.

It’s tonally even-handed in its delivery though, so it’s a nicely balanced listen, but it does get a little more disorganised during busier tracks.

There are stereo speakers for headphone-free listening, and if you’re watching a movie at home, there’s enough clarity here, not to mention a decent amount of volume.

Dialogue is a little thick and lacking in detail, but passable.

The Fire HD 8 is one of the least compromised budget tablets out there – but that doesn’t mean there aren’t compromises to be made.

Top of these is the screen, which lacks the sharpness, detail and vibrancy of pricier options. It could also be faster, the experience slicker and audio could be improved too.

At £90 though, you have to expect these things, and Amazon is to be applauded for improving the experience from the HD 8’s predecessor while bringing down the price.

However, the heavy and rigid Amazon focus won’t be for everyone, and we’d recommend a Prime membership if you’re considering buying this tablet.

Paired with Prime, the Fire HD 8 becomes a budget multimedia tablet to be reckoned with, bringing a broad range of content to your fingertips and making it quite the package indeed.

At an extra £80 a year, its reliance on this for the best experience docks it a star from the full five, but even without Prime, you’ll struggle to find a better performance under £150.