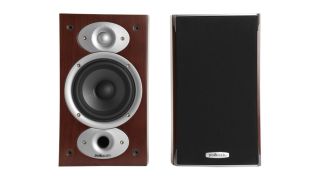 Under its parent company Sound United (who also own the likes of Marantz, Denon and Classe Audio), Polk Audio is a popular US consumer electronics brand in its native country.

With almost 50 years experience in making speakers, the Baltimore-founded company is well known for its wireless speakers, soundbars and subwoofers. The company also makes budget hi-fi speakers, such as the popular T15, T50 and TSi100 models, and with its prolific presence across US retailers there is often a deal to be had on a pair.

But with competition at the budget end of the hi-fi speaker market rife to say the least, are they worth investing in?

It’s been a few years since we’ve had the pleasure of hosting a Polk speaker in our test rooms, but the last, the TSx110Bs (then £100), received an admirable four stars for their weighty, nicely balanced and easy to drive sound. They weren't the last word in timing or subtlety, but they delivered impressive weight, scale and balance for their nominal price tag.

“Sometimes, affordable and good value can be the same thing,” we said in praise of the Polks. Of course, a company’s consistency can stray from model to model, so there's only so far a review an old model can attest for the newer pairs on sale today. The Polk Audio soundbars we've seen more recently haven't fared as well either.

Short answer: While Polk products rarely blow us away, they do have price on their side, as well as a history of fair sound and stylish design. Those on a budget may well be swayed by a $130-odd price tag or significant saving, but invariably we'd feel more confident recommending a pair of our favourite (albeit in most cases pricier) tried-and-tested budget hi-fi speakers such as the $229 Dali Spektor 1s.

We credited the Polk TSx110B not just for their sound but for the simplicity of their wall-mount design and their traditional hi-fi look. It’s good news, then, for those who, like us, have a soft spot for tradition. Polk’s current budget RTi range, several of models from which are on sale at a discount, bears a similar aesthetic in a choice of black and cherry finishes.

With dual as opposed to single binding posts, they can be bi-wired – not a given feature at this price – and with a recommended amplification requirement of 20 to 500 watts depending on the model, they should be easy for a budget stereo amplifier to drive.

The range comprises two bookshelf speakers and three floorstanders, with the differences between them largely lying in driver count and power handling.

Those on a slightly tighter budget may well come across Polk’s older TSi speaker range during their search. Often featuring on retailers’ top-selling lists, TSi speakers prices start from a very humble $129.

They too use Dynamic Balance mid/bass drivers and Dynamic Balance dome tweeters, and come with a wall-mount template and bi-wirable binding posts (only on the floorstanders). They don’t sport the brand’s latest cabinet, though, and recommended amplifier power is between 20 and 275 watts.

Again, the range comprises two bookshelf speakers and three floorstanders, with the differences between them largely lying in driver count and power handling.

In the absence of our own reviews, it's worth noting Amazon customer reviews, which are favourable across all models listed below - especially in the case of the most affordable pair, the TSi100s (pictured above).

If you're looking for a pair of budget speakers that we can wholly recommend - that we have reviewed and rated and given the official seal of approval - then we can happily point you in the direction of our favourite budget hi-fi speakers.

Below we have a trio of excellent speakers that are available in the US.

The Spektor 1s are ideal if you’re looking for small, affordable, great-sounding speakers. They're practically small and pump out an energetic and entertaining performance with strong dynamics.View Deal

Current Award winners. For their size, these speakers dig deep in the bass; they’re tonally balanced and impressively detailed too. Add fine build and finish and there’s much to applaud here.View Deal

Energetic and undeniably fun to listen to, these small and easy to accommodate tower speakers impressed us enough to give them a four-star review. View Deal