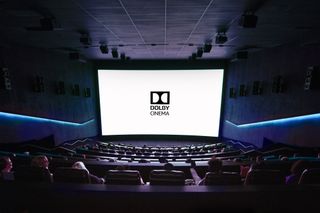 Both DTS and Dolby Digital are audio compression technologies, allowing movie makers to record surround sound that can be reproduced in cinemas as well as homes. Both deliver spine-tingling multi-channel sound, so what's the difference? And which is better?

The devil is in the detail. Or, more accurately, the way that the two technologies encode audio.

DTS is encoded at a higher bit rate and therefore is considered by some experts to be better quality. Others argue that Dolby Digital's technology is more advanced, and produces better sound quality at a lower bit rate.

Confused? The good news is that both are widely-supported and chances are you won't have to play favourites.

In their most basic form, both DTS and Dolby Digital support 5.1-channel audio (i.e. a typical home cinema system with five speakers and one subwoofer). And more advanced versions of the formats support 7.1-channels, HD surround sound and overhead speakers, in the form of DTS:X and Dolby Atmos.

What is Dolby Digital?

Dolby Digital is a multi-channel audio codec by Dolby Labs. It delivers a cinematic surround sound experience and is commonly referred to as the 'industry standard' (primarily because Dolby Labs has been around longer than DTS).

The first film to use Dolby Digital was Batman Returns in 1992. Since then, Dolby has released a slew of increasingly advanced codecs including Dolby Digital Plus, which supports HD surround sound and up to 7.1 speaker channels.

DTS (originally Digital Theater Systems) was founded in 1993 to compete with Dolby Labs for surround sound supremacy. The company got its big break when Steven Spielberg chose DTS for his dino-romp, Jurassic Park.

In 1996, DTS began cropping up in consumer hardware. The company might not be as well known as its main rival, but many purists believe that DTS offers better sound quality because it encodes audio at higher bit rates.

Like Dolby Digital, DTS has since released a plethora of more advanced surround sound formats including DTS-HD High Resolution, which supports up to 7.1 speaker channels. DTS has also brought out a lossless format, DTS-HD Master Audio. There's also DTS:X, which competes with Dolby's Atmos.

What is the difference between DTS and Dolby Digital?

Dolby Digital and DTS can both deliver fantastic surround sound experiences – but there are some key differences in the way that they achieve that end result.

The major differences are the compression levels and bit rates. Dolby Digital compresses 5.1 digital audio down to a bit rate of 640 kbits/s (kilobits per second) for Blu-ray discs. For DVD discs, it supports a slightly lower bit rate: up to 448 kbits/s.

DTS on the other hand, is less compressed and supports higher bit rates of up to 1.5Mb/s (megabits per second). For DVD discs, it supports up to 768 kbits/s.

The compression gap widens when you step up to the competing HD formats. Dolby Digital Plus supports up to 1.7Mbps, while DTS-HD High Resolution supports up to 6Mb/s. In theory, less compression during encoding equals more detailed audio that delivers a soundtrack closer to what was originally intended.

Case closed, then? Not so fast. Dolby argues that its codecs are more efficient than DTS codecs, and thus can sound every bit as good or better, even at a lower bit rate.

Ultimately, you can expect a fine home cinema experience from both, and often your choice of soundtrack will come down to whichever is supported by your source material.

These cutting-edge home cinema audio technologies are a step up from traditional surround sound. They recreate object-based effects, such as a plane flying overhead or bullets zinging around the room, thanks to multiple audio signals aimed at set-ups with a greater number of speakers than the standard 5.1.

Again, both should create an immersive experience, but there are some crucial differences between the two.

Dolby Atmos uses speakers placed in the ceiling to create to create a 'bubble' of sound. Not keen to cut holes in your ceiling? There's a range of simpler options including Dolby Atmos soundbars with upfiring drivers that bounce the sound of the ceiling to similar effect, and upfiring modules that you can add to traditional speakers.

You can find Dolby Atmos products from an increasing number of hardware manufacturers, as well as across Blu-ray discs and streaming services, including Amazon Prime Video and Netflix. TV broadcasters are beginning to support Atmos, too.

DTS:X is a bit more flexible. It works with standard surround sound set-ups and doesn't require extra overhead speakers. You can also manually adjust sound objects, meaning you can crank up the volume of voices on a soundtrack making it easier to hear dialogue over loud effects.

Around 90% of the home AV industry is supporting DTS:X, with many manufacturers either releasing firmware updates for existing receivers, or launching new models. The downside? It's less common. And neither Amazon Prime Video nor Netflix currently support DTS:X.

Which is better: DTS or Dolby Digital?

Based on the specs alone, DTS beats its rival with higher bit rates that promise a more realistic movie experience. That said, other factors such as signal to noise ratio and speaker calibration mean that plenty of audiophiles would rate Dolby above DTS.

With standards constantly evolving, the best way to upgrade your movie night is to ensure you have a good-quality components, set up properly and fed the highest possible source material. That way, whether it's DTS:X or Dolby Atmos, you'll be treated to thrilling home cinema entertainment.

10 of the best Blu-ray test discs