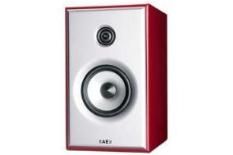 If you want a tiny, top-class monitor, these AE1 Mk III SEs are a must-audition

The original AE1S were Acoustic Energy's first speakers, and established the brand as a high-end force. At the time – we're talking about the mid-'80s – there was nothing else like these little monitors.

However, over the years the design has evolved into the rather slick, pricey and hugely capable speaker under test here.

The Mk III has been around for a few years. We last tested it in 2004 and liked it enough to make it an Award-winner.

These new SEs look similar to the older Mk III. The revisions amount to a simplification of the crossover – the number of components halved – and the option of custom paint finishes for an extra 30 per cent over the standard price.

Inconspicuous, but involving
The idea behind the new crossover is to make the speaker more musically involving – and it works, with the SEs delivering forceful dynamics.

When it comes to agility and detail resolution, we can't think of a better speaker for the cash, and stereo imaging is as precise as you'd hope for from a mini monitor.

You've got to remember these are tiny speakers, so while the SEs are mightily impressive in the bass they produce, they'll never have the authority of similarly priced larger speakers.