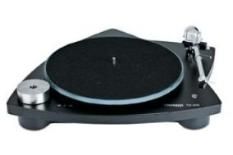 We're big fans of Thorens' TD160HD. It's a beautifully engineered Award-winning deck that sounds terrific. Recent price rises, though, have taken that deck's cost past the £2k mark.

For little over half the price of the senior deck, this design promises traditionally high Thorens performance at a reasonably affordable price.

The TD309 comes as a package, including dedicated arm and a decent moving-magnet cartridge.
It has a suspended sub-chassis design, which makes it less sensitive to placement than many rivals.

That said, every deck we've ever tried sounds better on a low-resonance support, positioned as far from the speakers as possible.

Set up is simple. Remove the three suspension transit screws, fit the arm counter weight and glass platter, and you're off. There's a high-mass plinth counterweight provided to balance out the weight of the arm and cartridge.

A tidy, precise sound
Unlike most rivals the TD309 enjoys electronic speed control. And in use it's a good deck for the money. It has a tidy, precise sound that works well with the classical music such as Edvard Grieg's Peer Gynt suites.

There's decent detail, and a pleasant consistency throughout the frequency range. The deck doesn't favour any particular genre, as spins of REM's Automatic for the People and a Naim sampler LP show.

And yet, while this Thorens is a perfectly decent deck, it isn't special. Its sound is a little restrained, lacking a touch of sparkle and drive – a shortfall that's enough to cost it a star.

If you're looking for a relatively fuss-free deck, the TD309 is well worth considering. However, we have to confess that our money would go on Clearaudio's classier and cheaper Concept instead.