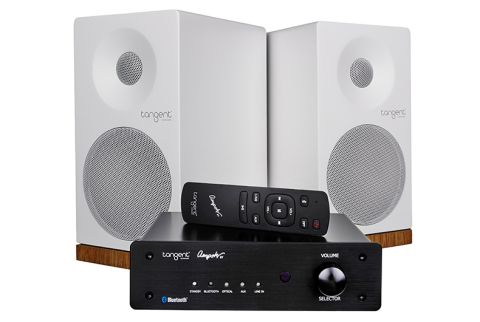 If you require a quality mini-system or want to start building something with greater scope, the Tangent Spectrum X4 should be on your shortlist for an audition

Even Mr McGregor of Beatrix Potter fame had to start his garden somewhere.

Long before he had to regularly chase Peter Rabbit and friends away with his rake, he presumably had to build it up from scratch, maybe starting with a couple of pot plants.

While on the face of it, Beatrix Potter’s children’s stories and hi-fi appear to have little in common, for Mr McGregor’s garden, read the Tangent Ampster X4 – a kind of a grow-your-own hi-fi, consisting of a bite-size stereo amp and pair of standmount speakers, all for the price of a boozy weekend.

Despite its diminutive stature, the amp is extremely well equipped, with Bluetooth 4.0, optical, aux and RCA line inputs; all you need is a smartphone through which to stream your music, but it leaves scope for adding a CD player or turntable, or even running through your TV.

The speakers in this package are Tangent’s Spectrum X4, which are available in black or white with a slim wooden base that looks a bit like a coffee coaster.

We sat them on a couple of Atacama speaker stands, but Tangent is also happy for you to place them on a bookshelf, or you can chip in a bit extra for wall or ceiling mounts; at only 27.5cm tall, they’re not going to take up heaps of room either way.

Even in that compact shell you’re treated to a 25mm tweeter, 10cm bass/midrange driver and rear-firing reflex port, so don’t anticipate timidity.

The only thing really lightweight about this package is the remote, which we lost down the side of the sofa a couple of times while testing, but we can’t have any complaints for the price; it works perfectly well and makes sure you really needn’t get up from your seat unless it’s to turn a record over.

To begin, we load up Tidal and stream Frank Carter and The Rattlesnakes’ acerbic debut album Blossom and are quite nearly blown backwards from our seats.

There’s no pride in being coy upon delivering an opening track named Juggernaut, and this Tangent’s presentation is fittingly vigorous.

From the song’s volatile opening, through Carter’s shrieking vocal and its sweat-drenched, bruised-knuckle breakdown, the Spectrum X4 is armed well with the artillery to maintain this assault on our ears.

But we ought not paint the performance as one-dimensional; timing, in particular, is impressive given the weight and girth of the sound, and the amount of body and bottom end Tangent has worked well to offer.

Sometimes it lacks a bit of space, but the arrangement is never cluttered and the Spectrum X4 is sharp and fleet-footed enough to keep up with this record’s frenetic pace.

If we take things down a notch with John Frusciante’s eclectic To Record Only Water For Ten Days, the Tangent is also able to showcase its nuance and a satisfying attention to detail.

Style and quality of recording tend to vary in this era of Frusciante’s work, and that’s evident when played through this system.

The presentation is still very forward, and sometimes we find ourselves wanting for a little restraint and a greater hold of dynamics, but for a £300 system we are very much entertained and content with the versatility that is on offer.

As we vary inputs, using Rega’s £250 Planar 1 turntable as a suitable companion and plugging our laptops in with an aux cable, there are the expected slight variations in quality and nature of the sound, but its general personality is very much unchanged.

Particularly with an entry-level amplifier offering a decent spread of connections, that consistency is a noted achievement.

Of course, when we switch the speakers for Q Acoustics’ Award-winning 3020s the improvement is immediately noticeable; there’s greater space, detail and delicacy with dynamics.

You could pair the Q Acoustics with our cheapest Award-winning stereo amplifier, the Onkyo A-9010, for £390 and get a better-rounded overall sound, but, as well as forgoing features such as Bluetooth and the Tangent’s compactness, that almost 30 per cent price hike is still quite a distance.

In many ways, that reaffirms the Spectrum X4’s place among entry-level hi-fi; here you’re getting a starter system, with amp and speakers already matched, gaining a bunch of features and the scope to upgrade as and when you find you want to, or as you can afford it.

We’ve been terrifically entertained by Tangent during this test, and that, really, is the greatest endorsement one can give.

See all our Tangent reviews