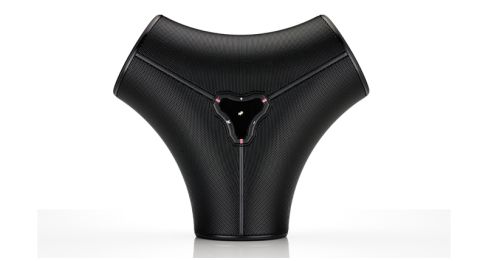 A funky design, but the flawed sound fails to impress

The Spaced360 is an unusual Bluetooth speaker. With one look, you know that this triangular-shaped device wants to stand out from the crowd. But its unique styling is core to its aim of delivering a larger spread of sound.

Spaced Audio also employs airSOUND technology (used by Orbitsound’s soundbars to increase the spread of sound) to make its 360-degree plans come to life. Does it work?

Well, the spread of sound is definitely large and open. It’s a solid sound as well, giving decent weight to the spacious presentation. That’s where the good news ends. Musically, the Spaced360 struggles to hold a rhythm together.

That’s the inherent flaw in having three drivers facing in three separate directions – the sound comes at you from different angles, bounces off surrounding objects, and reaches your ears at marginally different times. Add all those fractional delays up, and the resulting sound is a confused and disorganised sound that’s lost all sense of musical rhythm.

Play a complex, swing arrangement such as Big Bad Voodoo Daddy’s Mr Pinstripe Suit, and the Spaced360’s limitations come to the fore. The horns, double bass and vocals sound all over the place, lacking cohesion and subtlety. Detail is muddled, and timing is far from precise.

There’s a coarse edge to the treble, and the blaring trumpets and saxophones sound brash and unruly when the volume is turned up high. Even on a sparse recording such as Birdy’s Shelter, the Spaced360 isn’t as detailed and controlled as its rivals.

There are the makings of a decent speaker inside the Spaced360. Clamp your hands over two of the drivers, and the single driver pumping out the music shows how solid, powerful and punchy the speaker can sound.

But this tri-speaker arrangement diffuses that sound – and not evenly, either. Despite its larger soundfield, it’s not as direct and solid if you’re not facing a speaker driver directly. If you’re unlucky enough to face the blank space between the drivers, the sound will be vague.

The unit itself is sturdy and has a tough, plastic finish that feels durable enough to withstand the great outdoors. The triangle-shaped control panel in the middle of the unit, however, isn’t built as nicely. It’s a little flimsy.

The thin volume buttons are fiddly and the plastic finish feels cheap. The tiny strips of LED that indicate playback, mute and battery status (green, amber and red, respectively) could also be more polished. The Spaced360 is available in black or grey, but you can jazz it up with bright neon cases. The yellow, pink, white, orange and blue cases add a sense of fun, and are available for £30 each.

Whether you like the design is up to personal taste, but it’s clear that the Spaced360 is geared towards a younger audience, but rivals B&W, Libratone and Loewe all offer a more premium-feeling design on their equivalent wireless speakers.

Once fully charged, the Spaced360 lasts for a decent 14 hours. It comes with a small, circular charging platform that slots in neatly to the base of the speaker. There’s no locking mechanism, so it’s easy to dislocate the arrangement; make sure you place them on a flat surface to keep them in place.

Spaced360 has aptX Bluetooth on board, but you can also play music using the 3.5mm connector. Press down the control key at the centre to pair Bluetooth (a longer press will turn the speaker on and off). Those with NFC-enabled devices can simply tap on the centre key to make an even quicker connection.

The Spaced360 isn’t unique in offering pseudo-360-degree sound. Rival speakers such as the B&O BeoPlay A2 and Libratone Zipp BT also offer well dispersed sound, and with much greater success.

For this price – and £250 is a sizeable chunk of money to spend on a Bluetooth speaker – there are far better, more capable, more musical options out there. The Spaced360 has a stab at offering something different, but its performance fails to distinguish it from the rest of the market.