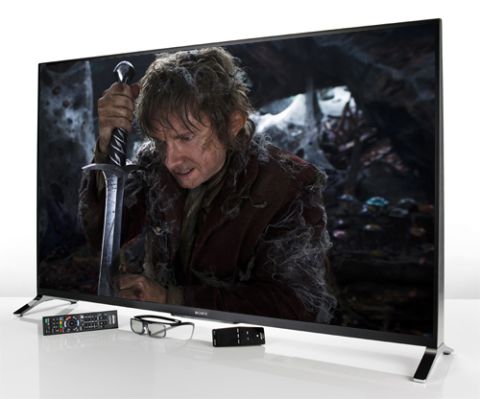 The W95 is a good TV in many regards, but we expect fireworks from a flagship set and the Sony just doesn’t quite deliver

4K Ultra HD TVs may be grabbing the headlines but there’s still plenty of life and interest in Full HD flatscreens, especially flagship sets such as the Sony KDL-55W955B.

Sony isn’t averse to tinkering with the aesthetic of its TVs (remember the laid back approach of the HX853 and the magnetic fluid speakers blended into last year’s X9005A?) and the W95 is no different.

From the front, it looks conventional enough, but peer around the side and you’ll see Sony’s new “wedge” design (available on select Sony 2014 TV ranges) in full effect.

Sony claims the wedge has a couple of key benefits. First, it gives the TV cabinet greater internal volume, which can theoretically be used to improve sound quality.

Second, it allows the TV’s centre of gravity to be lowered. The result is a shift from a normal pedestal stand to a simpler two-footed arrangement.

The feet slot into the underside of the chassis and can be fitted in two different positions, either at the extremes of the set flush with screen edge, or closer to the middle.

Having them closer to the middle means your stand doesn’t have to stretch the full width of the TV (a fraction under 124cm).

Elsewhere, this Sony W9 features a simple black bezel that runs around the edge of the screen.

We like the way it runs up and curves over the top of the set, even if its elegance is spoiled by the rather flimsy and industrial-looking foldaway Skype camera lurking behind the top of the screen.

The KDL-55W955 looks perfectly adequate, but we wouldn’t say it screams ‘premium’. Could the same be said for picture and sound quality?

We kick things off with a look at the TV’s Freeview HD tuner. The TV has a satellite tuner too, but it isn’t an official Freesat module.

This means you’ll get a long list of satellite channels to choose from but they’re presented in a disorganised manner.

The 55W955B shows it’s a competent upscaler. A quick blast of Eastenders in standard definition shows up a good amount of detail - on-screen noise isn’t completely absent, but nor does it distract from the edge definition and details on some of those weathered Walford faces.

Flick over to the same programme in high-def and, unsurprisingly, the Sony looks more at home.

There’s a jump in clarity, which has the knock-on effect of giving you greater insight into the Albert Square set.

We switch to our well-worn DVD of Training Day. The film may be long in the tooth, but it’s still one of our favourite test discs, littered as it is with scenes that are tricky to convey.

As Harris and Hoyt meet for the first time, the Sony has difficult textures, lighting and fine detail to contend with.

And it copes admirably. Harris’s black shirt shows good definition and detail, although the black of the material doesn’t appear that solid. The gold zip on Hoyte’s jacket shimmers as it catches the light and shows good, subtle edge definition.

Time for the Man of Steel Blu-ray. As Superman fights toe to toe with General Zod and his cronies, the Sony does a good job of tracking motion across the screen.

As the characters, jetfighters and alien spacecraft hurtle around in multiple directions, the Sony is confident at multitasking motion and resolution.

The Sony does a good job rendering the materials and styling of Superman’s figure-hugging outfit.

The film doesn’t burst with colour but what the Sony does do is handle hues with subtlety and care. The different shades of green in the fields surrounding the Kent farm are all expertly balanced.

Monsters University is a more colourful test for the Sony’s Triluminos colour processing. Where the characters could easily appear overcooked, the Sony paints them in a bold, colourful, yet convincing light.

We weren’t convinced by the way last years Triluminos sets handled blues, but the W95 doesn’t show any ill effects.

Back to Man Of Steel, and aboard Zod’s ship there’s plenty of opportunity to test the Sony’s black levels. And this is where you find the W95’s Achilles’ heel.

The set picks out some of the detail lurking in the shadows, but blacks don’t appear to have enough depth or solidity to them.

We’ve got a moment to view the same clip on the recently reviewed, five-star KDL-50W928B and the sense of depth and realism is more convincing.

And, no amount of tweaking the set’s backlight, contrast, brightness or advanced settings can make things better.

Even on its lowest setting, the amount of light coming through the set is still enough to rob the picture of pure, deep blacks.

The backlight’s a little uneven, but it’s not bad enough to notice when you’re engrossed in a movie.

Unlike the 50W829B that we’ve already reviewed, the W95 uses passive 3D technology. The set comes with two pairs of flat-packed glasses which snap together quickly and easily, but we’d have liked to see three or four pairs thrown in, so nobody feels left out.

Before you start watching, you’ll need to revisit your picture settings to take into account the switch to 3D.

But once you’re dialled in, watching this Sony 55in makes for a very pleasant experience. Over a prolonged session with Gravity we don’t find the 3D tiring or over the top.

There’s a nice balance to the picture as George Clooney and Sandra Bullock exchange dialogue at the beginning of the film.

There’s a nice subtle 3D effect as a loose screw floats out of the screen towards you and, as Clooney’s arm reaches out to grab it, there’s a fine sense of depth.

Detail levels are as good as they are in 2D, as is motion, with little crosstalk to speak of as Clooney jetpacks in and out of focus.

We’d like outer space to appear darker though – you never quite get the pure depth and darkness that the film really demands.

Thanks to that wedge design and the larger cabinet volume, Sony has been able to squeeze a separate tweeter into the W955, which it claims has given sound quality a helping hand.

Crank up the volume and you do notice there’s a greater sense of openness and clarity to the sound. You don’t get as much of that boxy, coloured and closed-in effect which can blight poorer-sounding sets.

With the film score to Man Of Steel, the Sony’s speakers impress with their scale and dynamic range.

Admittedly, it can’t produce that much bass weight, nor can it delve to the depths of an external subwoofer (Sony offers a wireless one as an optional accessory), but there’s still enough heft to make you think twice about a really budget soundbar.

Elsewhere there are a few additional sound modes to experiment with, including one that attempts to mimic surround surround.

With it engaged you can hear a shift in balance and more of a general spread of sound, but nothing that would have us stray too far from the “Standard” sound mode.

The standard issue Sony remote is pleasant to use.The buttons are placed and spaced sensibly and it’s relatively easy to navigate in the dark – which comes in handy, because there’s no backlight.

There are a couple of new changes for Sony 2014 TVs, including ‘Discover’, ‘Social View’ and ‘Football’ buttons.

Sliding your thumb or finger over the “home” bump gives you quick access to content including your favourite channels, on-demand programmes and radio stations.

We found the touch-pad took a little time to get used to but the sensitivity is nicely judged and it can be a quick way of finding your most-watched stations.

If you want to do away with the traditional unit, there’s also the option of using Sony’s SideView control app for iOS and Android devices.

The app might come second to the plastic remote (although it can mirror the controls), but it does have the attraction of a neat electronic programme guide that saves you from having to use the W95’s guide, which shrinks the picture.

SideView can pull up show and cast information while you can also use it to set timer recordings – you’ll need to have a hard drive hooked up to the relevant USB socket on the rear of the set to take advantage.

The W95’s pretty quick to shift between the different tabs for TV, movie, music and apps, each page then allows you to drill down and select relevant content.

There’s a decent selection of apps to choose from, including BBC iPlayer, Demand 5, Netflix and Amazon Instant Video, but there are a couple of notable absentees in the form of ITV Player and 4OD.

This new button on the Sony remote takes you straight to recommended content, be it TV shows or on-demand.

The Sony TV tracks the channels and programmes you’re watching and uses this information to populate what’s effectively a personalised list.

In just the few days we spent with the TV it had a decent idea of our viewing habits. It’s one of those features that should evolve and learn even more the longer you spend with it.

Press the Football button on the remote control while you’re watching a match and the TV attempts to position to you as part of the crowd.

We tried it with Chelsea versus Galatasaray in the Champions League with mixed results.

Crowd levels are boosted and you do feel a little closer to the action, but it’s not wholly convincing. If anything it makes the TV sound harder and less substantial.

Also, the live commentary isn’t completely removed so you can still hear the inane waffling of the commentary team, which spoils the effect.

Social View allows you to access Skype and log into Twitter. Select one of the trending topics or input your own, and TV hunts down relevant tweets which start sliding ticker-tape-style across the bottom of screen.

It’s a neat idea and saves you from reaching for the smartphone or tablet every five minutes, but we think you’re still more likely to use a separate physical device, especially for tweeting.

There also doesn’t appear to be any swear filter to prevent colourful language from floating across the screen.

Flagship products always come with the weight of expectation, it’s just a shame that we’re left wanting more from the Sony KDL-55W955B TV.

Colours, motion and sound quality are all to be admired, but it lacks a wow factor and is hindered by average black levels.

You’re looking at a good TV, not a great one.