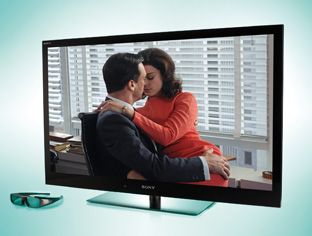 Undermined by one significant flaw, this Sony’s nothing like as good as it could be

It’s just as well, given the price-tag, that the Sony KDL-40NX723 looks expensive. Less than 3cm deep, fronted by a single sheet of Gorilla glass (www.corninggorillaglass.com) and impeccably finished, it’s undeniably a desirable object.

And it has the specification to match: Freeview HD, 3D, edge-arrayed LED backlighting, integrated wireless LAN giving painless access to Qriocity, iPlayer and a stack on social networking possibilities, Skype-ready… it is, as they say in the motor trade, fully loaded.

There are no 3D glasses included in the price, however – that, apparently, is asking too much.

One worryingly major flaw
Like the majority of Sony TVs, the NX723 benefits from comprehensive on-screen menus and a logical remote control. Set-up is straightforward – in fact, the Sony’s performance dictates that there’s really only one way to set it up.

That’s this screen’s biggest failing, so we may as well get it out of the way now: while the NX723’s picture-making ability is never in doubt (it handles motion beautifully, describes textures brilliantly and delivers a stack of detail regardless of source or circumstances) the images it serves up are noticeably and irritatingly dim.

The journey from dark to bright is a short one, and consequently contrasts just don’t have any punch. The only way to remedy this to set the picture mode to ‘vivid’ – this puts a rocket up the NX723 to the extent that its contrasts bear comparison with every other screen in the test.

The downside to that, though, is that you’ve no access to the Sony’s ample picture-finessing options in ‘vivid’ mode, so all the clever Sony algorithms you’ve paid for can never be utilised.

3D pictures low on crosstalk
This, as you can imagine, is a pity. Its overarching dimness aside, the NX723 is an accomplished device. 2D Blu-ray pictures are detailed, movement is stable in the way mountains are stable, edges are solidly defined and colours (other than bright ones) convince.

This is all true of Freeview HD images. They’re composed, lavishly detailed and are moved around with assurance. Even upscaled DVD content enjoys impressive detail levels, and the Sony fights hard against the softness that’s endemic in some rivals’ upscaled pictures.

3D movies are low on crosstalk and high on detail, too, but the inherent dimness of 3D images combines terribly with the NX723’s own weak contrasts to produce pictures that could conceivably make you believe you’re developing cataracts.

The autonomous ramping up of backlighting and contrast with 3D content compensates only partially.

As for sound, the Sony stands out as quite the hardest, most sibilant and least enjoyable listen we've heard in a while. Combined with the shortcomings in contrast described, it’s impossible to find more than three stars for the NX723.

For once, Sony has succeeded in snatching defeat from the jaws of what might have been victory.