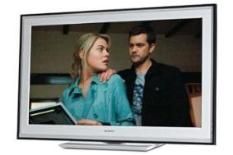 Excellent pictures and sound quality, but this screen isn't so good that it can justify its hefty price-tag

The Sony '32E5500 looks a little funky to say the least. This is down to its picture frame design: the white fascia is surrounded by a black bezel to give it that 'hang me on a wall' look. Use the Picture Frame Mode and you can display your own pictures.

The Sony's backlight is uniform, so there's no issue with clouding, and this helps to maintain decent black levels.

Detailed delivery from all sources
The inclusion of Motionflow 100HZ helps with movement in Slumdog Millionaire's shanty town chase sequences. Colours are handled evenly and the Sony picks out a super level of detail from Freeview, Blu-ray and standard DVD images.

Even the fancy picture frame styling can't tip the scales in favour of a five-star review.