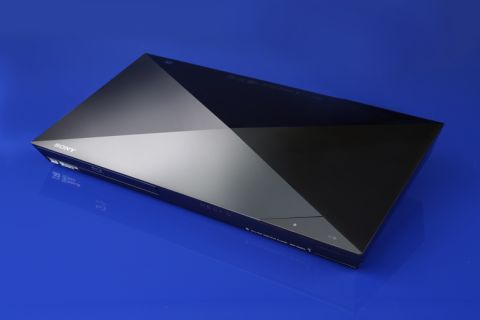 Sony has done it again, with a talented player that should be on your shortlist

You only need to look at our Awards over the past couple of years to see Sony’s track record in the Blu-ray player market is impressive, with two consecutive Product of the Year Awards and a handful of Best Buys too.

But, with its biggest rival Panasonic really back on its ‘A’ game in 2014, can Sony still keep its edge?

The BDP-S6200 is one down from Sony’s flagship model for 2014, slotting in to the five-strong range in a similar place to the Panasonic BDT460.

Sony has stuck with the angular ‘Sense of Quartz’ design on last year’s players, but has tweaked it to make it more symmetrical.

In black-gloss plastic, it won’t be to everyone’s liking.

Etched into its top panel is a triangular button, one corner for eject and the other for power (the only controls on the unit, so you will rely on the remote for the rest).

The remote could be better – it feels a little cheap. It’s an update from last year, but still underwhelms.

The picture this Sony produces makes up for all of this, however.

We play Man of Steel on Blu-ray and the S6200 springs into life. With a dual-core processor under the hood, pictures are sharp and detail second-to-none, with colours well relayed and on the leaner side of neutral.

But the effect isn’t overdone, and the Sony S6200 does a great job with difficult-to-render things such as skin tones.

Where Superman fights the Sub-Commanders, the S6200 does a superb job with motion, as the hero is being kicked from pillar-to-post with little evidence of judder.

This scene highlights the S6200’s audio skill too: fast and detailed sounds, dynamically strong and punchy.

Crashes could do with more muscle, but the handling of finer detail in soundtracks still gives the Sony an edge.

Switch to Gravity in 3D and the picture quality is really something. Well-rendered and convincing, the 3D effect is beautifully handled and never feels artificial or forced, with depth and space between objects.

The quality of Sony’s upscaling technology is immediately clear, with edges solidly drawn, noise kept to a minimum and impressive detail picked out to create a convincing Full HD picture.

Originally we had some hiccups with our DVD performance, with the S6200 freezing every time we tried to play one.

Sony replaced our sample and the problem was solved, so hopefully this issue won’t make its way to the shelves.

As for connectivity, there is just the single HDMI output, with one coaxial in place of the optical that we see in many rivals.

There’s also ethernet for those who prefer it to using built-in wi-fi.

You can play back content from other devices on your home network via DLNA, use Miracast for screen mirroring content from compatible portable devices or choose to stream on-demand content from the usual suspects - not to mention Sony’s own services, Music and Video Unlimited.

There’s a lot to love about the Sony, from its feature list to a performance that impresses across the board. The only fitting reward is the full five stars.