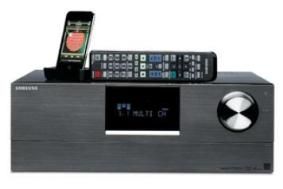 We know the Korean company makes a hell of a lot of kit, but we don't tend to get much in the way of AV amplification through our doors.

Firstly, it's a 7.2-channel receiver. Should you have, or want, two subwoofers this Samsung is suitably equipped.

Then there's an iPod dock as standard; a neat touch, although the cable is extraordinarily short and the 'C700 only seems capable of playing tunes in alphabetical order. You can skip tracks and change the volume but nothing more, which seems ludicrously restrictive.

3D pass through via HDMI
The four HDMI inputs and one output will pass through 3D content, and this seems the only key concern here as the other main benefit of 1.4 – using your HDMI cable as an ethernet bridge between two network devices – is an irrelevance with this non-network cable machine.

So it's down to the sound quality to redeem this admittedly nice-looking slab of electronics. Samsung's auto-set-up proves accurate, even if the lack of any on-screen menus makes navigation a touch fiddly.

Rivals still lead the way
Watching the Blu-ray of Pelham 123, with the Samsung doing the HD decoding, the tonal balance makes for easy listening and effects are steered accurately as part of a cohesive surround sound, but otherwise we're largely left non-plussed by what we hear.

Switch to the class-leading, same-priced Sony STR-DH800, and the greater detail, clarity and dynamics are instantly apparent.

Which leaves us? Well, with an AV amp that simply doesn't justify the initial excitement.