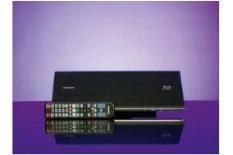 A stylish alternative to more traditional players, but there’s a lack of substance when compared to the class-leaders

Stylistically, the 'C7500 is a slight departure from the run-of-the-mill rectangular boxes that dominate the market at this price point.

Samsung is pitching this particular model to the more style-conscious consumer, who desires a more svelte, sophisticated look to their kit.

But to be fair to Samsung, the only feature of note to be given the chop compared to the ‘C6500 is the multi-channel analogue output.

Of course, this isn't a problem if you own an HDMI-equipped receiver, or plan to run an HDMI cable straight to your TV. Samsung still manages to find room for 1GB of internal memory and integrated wi-fi connectivity.

Alternatively, you can attach it to the supplied stand so it's perched at an angle. Touch-sensitive buttons can be found above the corresponding icons on the bottom edge of the unit.

They're responsive but you'll get the odd fingerprint smear on that glossy, wood-effect finish.

As with its siblings you get access to Samsung's Internet@TV service that allows you to stream media content from certain providers.

YouTube is quick to buffer and the videos are of surprisingly decent quality.

Fast disc loading times
Fire up the player and you're off to a good start. Forget boot-up times, the '7500 has its skates on when it comes to loading Blu-ray discs.

Times vary between titles, but on some occasions it beats the class-leaders by more than 20 seconds.

What's slightly disappointing is that picture quality isn't much improved over its cheaper sibling, the Samsung BD-C6500.

Play Harry Potter and the Chamber of Secrets, and on-screen noise is still prevalent and motion still proves to be a stumbling block.

Overall, detail levels are decent for the money, but never reach the heights of near rivals

Keeps control of the music
The good news is it exerts more control over music than the ‘C6500. There's also a greater sense of drama and conviction with film soundtracks, although the brightness that afflicts the cheaper deck isn't totally stamped out.

Performance-wise, the 'C7500 is arguably one of this company's better offerings but this is offset by the more expensive price tag and overshadowed by cheaper and more competent rivals.