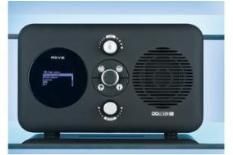 Lots to like here, but sound is a bit bottom-heavy

The Revo Domino D3 is unremarkably proportioned and an unassuming looker, but where a rubbery feel is concerned it's a definite front-runner.

The same can't be said of the ergonomics. The little joystick is vague in operation, and the on-screen menus are small.

Plenty of vigour
It's a reasonably poised and quite energetic listen, with plenty of vigour up in the higher echelons of the frequency range.

There's better overall balance to some rival offerings, though – if not quite such a touchy-feely finish. Despite having a wealth of sound adjustment, the Revo does overstate low frequencies, to the detriment of the music.