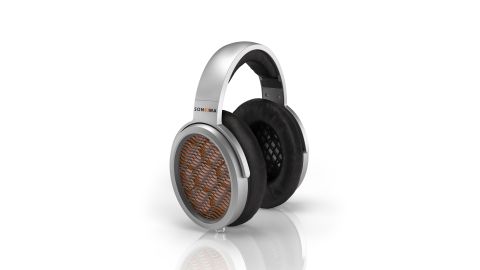 The Sonoma Model one is an exceptional-sounding headphone package, but some aspects of the build need sorting

If you’re willing to spend five thousand pounds on a pair of headphones it suggests a serious (and perhaps worrying) obsession for personal listening.

While we don’t know a cure for this particular ailment, we can aid your habit by suggesting you have a good long listen to the Sonoma One package from Warwick Acoustics. It’s easily one of the best-sounding options we’ve heard.

Pay that hefty sum of money and you not only get a pair of open-backed electrostatic headphones but also a dedicated energizer amplifier. These headphones won’t work with conventional amplification, because electrostatic drivers require high voltages. In this case, the audio signal is superimposed on a 1350V DC bias voltage.

Electrostatic headphones are about as exotic as headphones get. The use of this kind of drive unit promises much, from greater detail and agility to far lower distortion than the alternatives – thanks to an exceptionally light diaphragm that’s driven over its entire surface, rather than just the centre as in a conventional dynamic driver.

Warwick Acoustics has its own distinctive take on electrostatic drivers. Most have two metal grids, one on each side of the highly charged diaphragm. These grids carry the music signal and the diaphragm is either attracted or repelled as the music demands.

The unit in the Sonoma only has a grid behind the diaphragm, so getting rid of any distortions caused by the sound having to move through the traditional front grid to get to the ear. On paper, driving the diaphragm from only one side isn’t quite as good as a dual arrangement, but Warwick has done a lot of work to minimise any disadvantages.

Much care has been taken over the diaphragm material, which is of a thin, 15 uM laminate construction, but perhaps even more unusual is that it is bonded to a partitioned plate that splits the surface area into smaller, differently sized hexagonal sections. The idea is that splitting the radiating area in this way and driving all the sections in parallel spreads any distortions, leading to a cleaner, clearer sound.

These are open-backed headphones, and while that has many advantages when it comes to performance, it means that sound leaks out as well as in. If you listen at a reasonable volume, everyone in the same room will hear your music too. Equally, if you’re listening in a noisy environment, that sound will be obvious.

The energizer is a chunky but compact unit that takes up about as much desk space as a largish hardback. Inside, it uses discrete FET-based Class A circuitry that is designed to work across a wide bandwidth and with low distortion, and is of course carefully matched to the electrical demands of the headphones.

It has both digital and analogue inputs. Alongside the USB (capable of handling 32-bit/384kHz PCM signals as well as up to DSD128) there’s a single coax (24-bit/192kHz) and two analogue inputs – one stereo pair of RCAs and a 3.5mm input, presumably for portable music sources.

Oddly, optical isn’t on the menu and, perhaps more understandably due to limitations in performance, there’s no Bluetooth option. Including such features would make the package more versatile. We’d like a display too, ideally showing the type of incoming signal and input being used.

You’ll need to be a little careful if you’re using the analogue inputs. Both have specified upper signal limits – the RCA will take 2.1v while the 3.5mm jack is limited to 0.85v – and if you go beyond these it's possible to overload the circuit, though the only consequence is likely to be distorted sound rather than any real damage. If you need to use analogue it’s probably best to use a source that has a volume control built-in so you can turn down the signal level if the energizer has any issues.

All input signals are handled in the digital domain, so any analogue input is converted before any other processing is done. This conversion is done by a 32-bit/384kHz AKM Premium ADC, which is claimed to have a signal to noise ratio in excess of 120dB. There’s a good deal of signal processing done in the box with the aim of accounting for the headphones electrical characteristics and so getting the optimum sound possible.

This is done using a 64-bit fixed-point DSP on a multicore XMOS processor. The volume control is also handled digitally, with Warwick Acoustics claiming benefits in dynamic range, channel matching, noise and linearity by doing so.

The internal digital-to-analogue conversion is done using a pair of ESS Sabre’s highly-respected 32-bit reference chips. These are stereo in nature but are used in mono configuration – one per channel – to improve the noise performance and sound quality.

On the whole, the headphones are mostly comfortable. They’re light at just 303g and their Cabretta leather-covered earpads feel nice on the skin. They don’t look or feel particularly high-end though, and in many ways remind us of decent efforts at the £300 price level. That’s certainly not a good thing.

The energizer gives a better impression of luxury than the headphones. It has a solid, nicely finished aluminium case and some nicely machined detailing for the air vents. We particularly like the feel of the volume control, which is solid and precise in operation.

But it’s not perfect either. When using USB, there are times when it takes multiple attempts at connection to get things working. They always do in the end, but we rarely experience this with new products these days. More worryingly, our review sample stops working properly altogether towards the end of the review process. It powers up but won’t connect to any source analogue or digital.

Such things can happen on occasions, even to the priciest of kit, so provided the issues are sorted in a fuss free manner, we’re not overly concerned. However, in this case, it follows a minor fault in our original headphone sample, which suggests that reliability may not be a Sonoma strong point. We might have been unlucky with the samples provided, but can only report as we find.

Once we start listening, we notice that the sound of the earpieces is notably affected by any movement of the head, apparently caused by the sealing of the earpads. Any movement seems to cause small changes of air pressure inside the earpad that affects the movement of the drive units, so changing their output level momentarily. Stay still and there won’t be an issue, but sing or dance along to whatever you’re listening to and it’s easy to hear the effects.

The problem is that once warmed up, this headphone system sounds so stunningly clear and informative that we can’t help but get involved with the music. We’ve heard hundreds of pairs over the years but struggle to think of anything equivalently priced that comes close to the resolution and agility of this set-up. If you want to do significantly better then you’re going to have to up your budget considerably from the £5k of the Model One.

We listen to Arvo Part’s Tabula Rasa and the Sonomas rise to the challenge. They’re astonishingly detailed, revealing instrumental textures and dynamic nuances that most rivals would simply ignore. They’re organised too, managing to track the multitude of instrumental strands and assemble them in an understandable and wholly musical manner.

It’s an open and spacious sound, no doubt helped by the sophisticated digital processing in the energizer. The crisp presentation and lack of overhang make the Model Ones sound a little forward at first, but over time we get used to this thanks to the lack of harshness.

Tonally things are as even as they come, with no part of the frequency range dominating. Instruments sound natural with precisely defined leading and trailing edges to notes.

We switch to Kanye West’s Yeezus set and we’re impressed by the speed and rhythmic coherence of the Sonomas. They’re exciting and fun, but also revealing enough to show the impressive depth and imagination of West’s production skills.

There’s a good amount of attack overall, but some may want a bit more kick and authority in the bass. We start off feeling that way but are ultimately won over by the evenness and articulation at low frequencies. Going back to more bombastic alternatives, such as a similarly priced Focal Stellia / Chord Hugo 2 combination, and the result is distinctly second best in comparison.

The Model One package is an outstanding success if judged purely on sound. It’s clearly a class leader in this respect and normally that would be enough for us to give it a wholehearted recommendation. Unfortunately, we can’t do that until Warwick does some tidying-up in terms of build and reliability.

So, Warwick Acoustics, how about it? Fix these things so this package can get the review it clearly deserves. No one will be more pleased than us if you do.