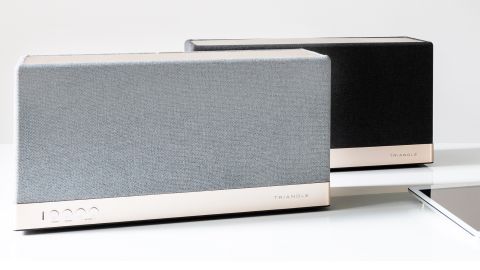 Take a look at Triangle’s refreshingly uncluttered and unpretentious website and you’ll see a neat timeline of the company’s often quirky loudspeaker hits, dating all the way back to 1980 – the year the French company produced its first model.

The latest entry on that timeline, the Triangle AIO 3, sticks out from the line-up somewhat – as it represents the brand’s only one-box wireless speaker.

The Triangle AIO 3 has a classic, chic design that’s almost impossible to dislike. Weighing 5kg and slightly longer than a shoebox, it’s covered in designer Scandinavian woven fabric – the ultimate in hygge for music-lovers.

Our review sample is arctic blue with gold champagne, brushed aluminium metalwork, but the AIO 3 is also available in lime green, grey or slate black fabric, with the option of a silver brushed aluminium finish.

We like the cold touch, the high-end feel of the circular buttons and the fact that the AIO 3 compliments almost any decor. The volume indicator lights shine out from beneath the fabric so as not to over-complicate the aesthetic.

Inside, there’s a wooden enclosure with four drivers in total – two 25mm tweeters and two 10cm woofers, driven with a total of 45W of power. There’s a 3.5mm aux in jack at the back alongside an optical input, an ethernet cable and USB (to read a flash drive or for charging).

Set-up is simple via the Triangle AIO app – the unit even talks to you to reassure you that everything is going well, and announces when you’ve made a Bluetooth connection.

Tidal, Deezer, Qobuz, Spotify and TuneIn are all included as options on the three-panel, user-friendly app. Triangle claims you can name, pair and control up to five AIO 3 speakers via wi-fi, or up to ten with ethernet connection.

There is a black plastic remote supplied in the box, but it’s fairly basic and not nearly as stylish as the unit it operates. It’s best to keep it to hand in case you want to tweak the treble and bass levels.

One gripe we have with the AIO 3 is that it’s not possible to access EQ functions via the Triangle AIO app for iPhone, so while you’ll hear a difference, there’s no visual proof of the levels. However, Triangle says they may be included in a later app update.

Streaming with the AIO 3’s embedded Tidal service, we’re immediately aware that this unit is capable of room-filling volume and good bass depth for its size. There’s also a generous helping of tonal accuracy and emotion.

We feel the intention behind each note in Franz Schubert’s Impromptus Opp. 90 and 142. With a subtle and spacious midrange, we almost see hands dance over black and white keys and feel nuances like the intake of breath from the musicians.

Switching to Green Day’s Boulevard Of Broken Dreams, the stoic and defiant ‘walking’ bass guitar comes through with clarity and pleasing texture. The Triangle AIO 3 deals competently with Billie Joe Armstrong’s unapologetically raw, angst-ridden vocals, placing them upfront in the mix, but never obtrusively so.

We pair up our iPad and listen to Wagner’s Die Walkure, Act III: Ride Of The Valkyries played by the Budapest Symphony Orchestra on Spotify Premium. The space between the different instruments is notable, with the speedy, urgent string passages duly handled.

The clash of cymbals is clear, and although the presentation would benefit from some refinement through the treble here, we can of course alter the levels ourselves to make the shortcoming a little less obvious.

At the other end of the scale, the initial, rumbling crescendo isn’t quite delivered in terms of dynamic punch, which occasionally feels slightly loose through the bass.

The silence needed to give a dramatic effect when the interplay of instruments stops abruptly isn’t wholly recreated, but it’s a relatively minor issue in an otherwise pleasant overall performance.

Texturally, the AIO 3 is more open, subtle, tonally detailed and pleasing through the midrange than the similarly-priced Naim Mu-so Qb. While the bass lacks a chunk of the Naim’s precision and drive, the Triangle remains an entertaining listen.

With plenty of easy playback services embedded, at this price, it’s an attractive option – despite the tough competition.