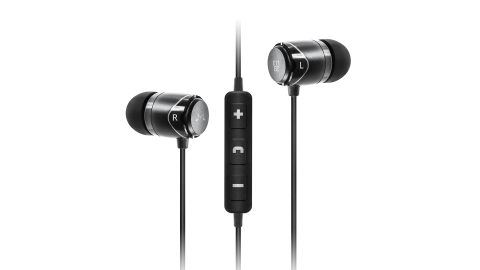 Does any situation better justify an adult tantrum than leaving the house only to realise your Bluetooth headphones’ battery is completely flat? Recharging is a downside of any wireless pair, but needless to say the less often you need to recharge, the better.

By giving its new E11BT in-ears an exceptional 20-hour battery life that few rivals at this price are blessed with, SoundMagic is aiming to reduce the problem to one that happens far less frequently.

The E11BTs are Bluetooth versions of the five-star wired SoundMagic E11Cs, but are much more than simply two buds, a cable and a Bluetooth transmitter. They sport a comfortable, pliable neckband design, are sweat and water resistant to IPX4 (meaning they should survive being splashed with water), and have a three-button remote that’s compatible with both Android and Apple devices.

As with their E11C siblings, their speaker and acoustic chamber have been upgraded over the ones in the previous E10 in-ear family, including the four-star E10BTs that the E11BTs replace.

While they use the latest Bluetooth 5.0 connection and support AAC (a lossy digital audio transmission used by YouTube and Apple), they don’t support the higher standard aptX Bluetooth. That puts them behind rivals such as the Award-winning Beyerdynamic Byron BTs, but it's not the end of the world at this price.

After running in the E11BTs overnight, we play Idlewild’s Tell Me Ten Words via Tidal, and are treated to a clear, tonally balanced rendition that we could comfortably listen to for the duration of the E11BT’s generous battery life.

That familiar SoundMagic sonic character locks down a solid first impression of being immediately listenable, an impression that lasts as the jangly acoustic opener and vocal are joined by an energised drumbeat. They have the weight, space and detail to keep every part of the mix discernible from one another. There’s enough animation about them to ensure they don’t sound lifeless, too. So far, so good.

They are certainly sonically agreeable – there’s no thinness or unruly thickness, harsh treble or baggy, overstated bass here – but the E11BTs don’t quite engage as thoroughly as we believe they should. Rhythmically, there’s a lack of coordination between the overlapping acoustic lines, and when it comes to dynamics, the E11BTs are pretty stagnant.

We switch to Lindsey Stirling’s Crystallize , and the E11BTs fail to massively undulate with the rise and falls of the track’s vigorous violin playing. Of course, we don’t expect on-the-money metrics from £70 Bluetooth buds, but it's not unfair to ask a little more of headphones at this price.

It’s a solitary blot, though. The SoundMagics sound pretty good overall and measure up to their rivals as far as build and comfort are concerned.

The E11BT’s neckband is as unobtrusive as they come. Far from being a cumbersome chunk of plastic that feels like you’re wearing the internal wiring of a neck travel cushion, the band is a narrow piece of flat rubber that’s so flexible it can be pulled flat or bunched up. Weight is evenly distributed thanks to a built-in battery on each side so the neckband doesn’t slip down one side, even during exercise.

The aluminium housings attach together magnetically, which is handy when they’re not in use. Also included in the box is a storage pouch and three sizes of ear tips.

Overall, the SoundMagic E11BTs are recommendable for their generous battery, practical design and clear, even-handed sound.

As with the E10BTs, they don’t quite offer the most wholesome sonic package for their price, unlike their wired siblings. But if you’re after a workout-friendly pair of wireless in-ears under £100, there aren’t many similarly-priced Bluetooth buds we’ve come across that do a better all-round job than these SoundMagics.

Read all our SoundMagic reviews