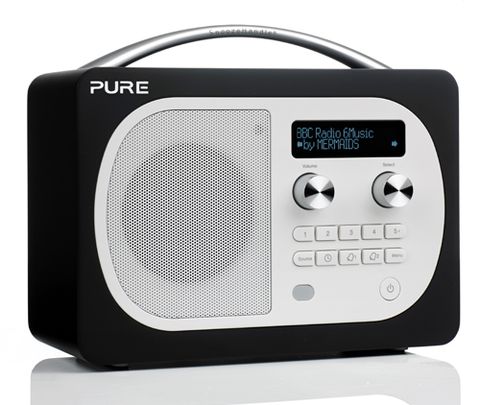 A glance at the winners in the radio category for our 2013 Awards shows the high regard we have for Pure radios.

This product, the Evoke D4 with Bluetooth, sits somewhere between the two in terms of both features and price.

This is a DAB/FM radio with the added bonus of Bluetooth streaming. The D2 that took our Best Buy is also now available with Bluetooth for £100 – although we haven’t tested that specific model. And the F4 adds internet radio to the D4’s features.

This model, then, seems a little in danger of falling between two stools.

First impressions are good. Take it out of the box and you’re greeted with a nicely finished unit that's solid but isn’t too heavy, and there’s a credit-card remote control that is a classier effort than most.

Set-up is straightforward: pull up the telescopic aerial, plug in the juice, push the power button and the unit will start to auto-tune DAB and FM.

Navigating around the stations is easy too – turn the ‘select’ button to find a new station and push it in to go to the new choice.

You can set up to 15 presets in both FM and DAB, four of which are quickly accessed by the buttons on the front of the unit or the remote. The remaining 11 are behind the 5+ button: push that, then select presets 5 through 15.

It’s a minor faff, but easy enough once you’ve done it once or twice. And, of course, it’s only necessary for your second-division stations…

Linking to a Bluetooth-enabled source is also encouragingly stress free. We select Bluetooth via the ‘source’ button and our MacBook finds the D4 without any hassle.

Heard in isolation, the Evoke D4 with Bluetooth delivers a very acceptable sound. It is a touch thick in the bass, perhaps, but that adds a nice warm tone to things, which can be especially pleasing with voices – so vital in a radio’s performance.

Music, too, comes across well on first listen; benefiting from that warm, fuzzy bottom end.

But it’s precisely because that phrase ‘warm, fuzzy bottom end’ has gone through our minds that alarm bells ring. Such a term would never have entered our heads with the Evokes D2 and F4. It’s a nice sound, sure – but is it ‘Pure’ enough?

So down to the stock room we go to retrieve our Evoke D2 for some comparative listening. And, sure enough, our ears have not been deceiving us.

The D2 rings out clear as a bell, highlighting in particular that all-important midrange. The D4 sounds just a touch veiled in comparison – the vocals in songs are harder to make out, the spoken word is just not quite as clear.

Make no mistake, it’s still a decent sound – it’s just not quite as impressive as that of its sibling.

And that sonic character is the same whatever the source. We listen via Bluetooth, the auxiliary input, headphone socket, FM and DAB; but that slightly ‘Vaselined-lens’ sound persists.

The D4 won’t go ear-shatteringly loud either – a trait that it does share with many of its stablemates. It’s more than capable of dealing with a bedroom or kitchen, but don’t expect it to be your main source of tunes for a party.

The remote control is handy enough, but we’re not completely sure of its value. This is a unit for a small room, and you cannot switch sources via the remote, so you’ll have to go over to the D4 to swap from a Bluetooth stream back to radio.

It serves well in the bedroom and kitchen, though, with two alarms and a kitchen timer useful additions, along with a snooze function that is activated with a touch of the handle.

Overall, then, this is a decent radio – it’s just that it doesn’t sound as good as some of its stablemates.

It is, as we feared: the D4 falls between two stools – we would trade up to the F4 for its internet functions, or down to the D2 for its purer sound.