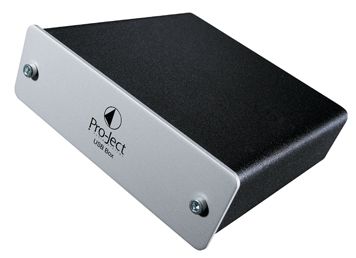 It's certainly got its plus points, but this Pro-ject is a little too pedestrian for us

If weight was the only measure of quality, this Pro-ject would romp home with five stars: this tiny unit feels like a brick.

But it’s sound that matters to us, and it’s here that the USB Box is lacking.

Connect your computer to the USB (the single input) and the Pro-ject will draw power and convert 16-bit, 44.1kHz tracks before outputting them through the stereo RCA outputs.

Play Nick Cave’s soundtrack to The Road and the USB Box digs up plenty of detail and precision, and has a tonal transparency that means instruments have a convincing timbre, which is a rarer quality than it sounds.

The problem is that notes don’t link with each other as well as they might, resulting in a slight lack of cohesiveness.

This combines with a surprising lack of dynamics to create a delivery that’s a little pedestrian – and that’s a shame, because with more drama and bite sitting alongside that tonal sweetness, it could’ve been great.