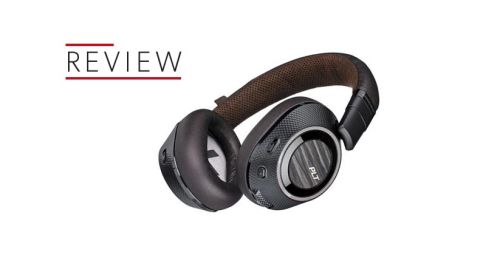 There’s talent here, but the overall performance is let down by poor bass

The most desirable headphones around may, among other things, be comfortable to wear on the head - but they’re usually too expensive to make you feel similarly comfortable when handing over your debit card.

At around £200, the Plantronics Backbeat Pro 2s are £80 cheaper than the Bose Quietcomfort 35s, but with all the same core features and a few more extras for good measure.

This might make you feel more comfortable when forking out for the Backbeats but, while there are some strong parts to their sound, they’re let down by overcooked bass.

MORE: Bose vs Sennheiser vs Sony – which are the best wireless noise-cancelling headphones?

The Pro 2s are full-size headphones, similar in stature to Sony's MDR-100AAP. From a few feet away they look the part, particularly thanks to their big protein leather pads and similarly synthetic leather-topped headband.

Up close, the cups look a little crowded. There’s a disc of fake wood surrounded by a ring of dotted plastic, bordered by a ring that looks like it’s been inlaid with tiny crystals (but is actually a metal grille).

There’s a sea of plastic around this, embossed with contours that look like they could have been made with a woodblock artist’s chisel.

This may make the Backbeat Pro 2s sound a visual mess, which would be a little unfair. However, they don’t look as simple and attractive as the Bose Quietcomfort 35s.

They are comfortable though, owing to large over-ear pads and generous foam on the band.

Less isn’t more in Plantronics’ world. This philosophy continues in its wealth of features. These are wireless Bluetooth headphones with aptX, active noise cancellation and a couple of extras most rival designs leave out.

Sensors in the pads allow the Backbeat Pro 2s to automatically pause your music when you take them off. There is also a mode that uses the microphone to let you hear your surroundings without taking them off.

Battery life is also very good at 24 hours, and there are comprehensive controls on the cups. There are buttons for playback control, and one of the rings on the left cup can be rotated to alter volume.

The one missing item is NFC, but Plantronics also makes a more expensive Special Edition version of the Backbeat Pro 2s that adds the feature.

Bluetooth signal quality is good, with no significant interference or drop-outs. Active noise cancellation is reasonable, but those expecting the efficacy of Bose’s best ANC pairs will be disappointed. These Plantronics cut down the low-end din of the city, aircon units and other humming appliances, but they don’t eradicate them.

Alternatives from AKG and Sony, as well as Bose, are more effective. The Plantronics' main benefit is less of a sense of air pressure in your ears than some other pairs, including Bose’s.

The Backbeat Pro 2s have 40mm dynamic drivers. Their sound has a number of admirable elements, but is let down by bass that drags audio quality down a league below their peers.

Let's start with the good points. The Backbeat Pro 2s are smooth and have an enjoyable soundfield. Like the best full-size headphones the sound is wide, seeming to come from around your ears rather than between them. It’s an immersive soundscape.

Detail is fairly good, with a decent amount of musical information delivered by the mids and treble without any harshness or abrasiveness making the Backbeat Pro 2s seem they’re trying too hard. The aim seems to be a smooth and easygoing sound, and it's right on target.

This is a perfectly fine goal, but the Pro 2s trip over their own bass. The low end panders to the long-standing populist obsession with the stuff, but it goes a little too far.

Bass is soft and slow. There’s plenty of weight, but it’s leaden and manifests as a cloud of mid-bass that hangs over the fairly good detail in the higher registers like a smog haze over a city.

It reduces separation and transparency, ultimately weighing down the Plantronics and sapping their energy and dynamics. These could be very good-sounding headphones, but a couple of tuning choices mean they are only fair.

The Plantronics Backbeat Pro 2s are cheaper than their perceived rivals, and have the benefit of extra features that many will appreciate.

However, the Backbeats’ positive sound characteristics are dragged down by unchecked bass and, ultimately, that spoils the sound.