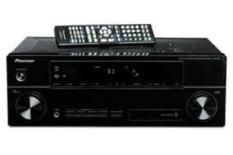 A solid performer, but sounds a little underwhelming compared to its rivals.

Pioneer has already impressed us with its VSX-920 and VSX-LX53 surround sound amps over recent months. Now it's time to get to grips with the ultra-affordable, five-channel VSX-520.

As you'd expect from a budget amp, the feature count isn't especially high, but all the basics have been accounted for.

There's onboard decoding for Dolby TrueHD and DTS-HD Master Audio high-def audio formats. No new amp can afford to ignore the emergence of 3D technology, so the Pioneer equips you with three, 3D-ready HDMI sockets, together with component video, digital coaxial and digital optical ins.

It's a great all-round provider
On the rear of the amp you'll notice that the front left and right channels are the only ones to use standard-issue speaker terminals – rather disappointingly, the surround and centre channels have to make do with cheap-looking spring-loaded connections.

The Pioneer does include a socket for attaching its optional Bluetooth adaptor (AS-BT100), but it's a shame that there's no iPod connectivity via USB (an excellent feature found further up Pioneer's range).

Video upconversion and upscaling are also absent, but that's hardly a punishable offence when you take into account the amp's price tag.

Thankfully, the ‘520 still features Pioneer's accurate and thorough MCACC automatic speaker calibration system, so your speaker package will be up and running with minimal fuss.

Action sound is not vague or messy
As everyone's favourite mythical villain battles the French on Dungeness beach, the action sounds solid and controlled, not vague or messy. As swords clash, the Pioneer impressively resists the temptation to sound bright or hard.

When you're listening to movies, we'd recommend hitting the amp's Stream Direct button. This bypasses the machine's tone controls, thus allowing it to produce the purest sound possible.

Our only reservation concerning the VSX520 is that real sonic punch and dynamics are in relatively short supply. Even at this money, the current class leaders produce a more invigorating and involving sound, a performance of more verve and power than the Pioneer can manage.

It's a solid enough option for an entry-level system, but there are better home cinema amplifiers out there, even at this price.