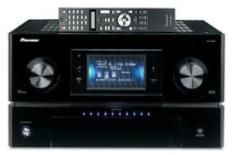 A remarkably good foray into this price class for Pioneer: well worth a proper investigation

Although Pioneer is no stranger to high-end home cinema, this price-level is uncharted territory.
The SC-LX90 certainly looks the part.

Pioneer's development codename for this project was ‘Susano', a Japanese God endowed with power over the seas and storms.

The finished amp looks every bit as heavenly. The glossy black finish is exceptional, matching Pioneer's similarly upmarket plasma TVs. It's more spare than most rival designs, its fascia dominated by a large, full-colour and clear display screen.

The Pioneer is also large, even by the standards of a class that boasts some particularly big units: the cutaway around its waist separates the box into distinct ‘pre' and ‘power' units, with the smaller lower section playing host to ten channels of power amplification.

Many options for great sound
Each amp can be assigned tasks: you could set up your system to drive seven speakers with the front three biamplified, for example, or with specific speakers used to drive music in another room.

Power aside, the Pioneer also features everything it needs to compete at this evel: powerful video upconversion and scaling, ultra-precise automatic calibration and equalization, a horde of processing and decoding options (including, of course, the latest high-def audio modes), and full Network Media support for all manner of computer content, including digital music formats, digital pictures and even movies.

So far so comprehensive. Set-up is rapid and easy, and from the off, the Pioneer charges into the fray with zeal. We've seldom heard a faster, more exciting listen: the SC-LX90's sheer drive, its ability to capture fast effects shifts, is breathtaking.

It can charge from quiet to loud in the blink of an eye, as the ‘jump' moment at the start of I Am Legend ably illustrates.

That speed isn't at the expense of control.The SC-LX90 is undeniably more forward-sounding and direct a listen than, say, the Yamaha DSP-Z11 – which some may prefer – but it's by no means harsh or hard, even when playing at high volumes.

High frequencies are pin-sharp, to be sure, but also well-marshalled and accurately defined, with no undesirable steel to their edges.

The result is an amp you've just got to listen to. It makes movies viscerally thrilling or intimate and involving as needed, and is especially adept at relaying rhythms, making it a more musical listen than many of its ilk. It's a fine achievement for Pioneer.