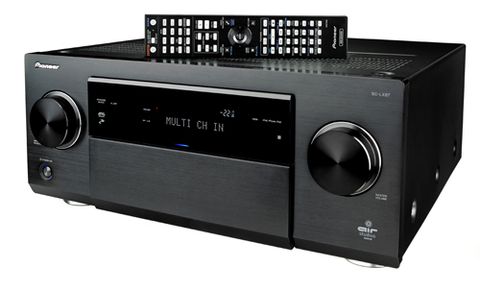 Pioneer strikes gold again. The SC-LX87 is a stunning AV amp with extraordinary in performance and features. You must listen to this.

This is a show-stopping powerhouse that builds on the sturdy foundations laid down by last year’s Award-winning SC-LX86.

There are plenty of budget AV receivers on the market, but £2000 gets you a boost in power, a wealth of connections and features, and a properly impressive 9.2-channel surround sound performance.

We start with an exercise in annoying the neighbours with a Blu-ray of Man Of Steel. The scene where Zod is overwhelmed by sound is an excellent test of effects placement.

Your attention is grabbed by the fire alarm from the front-right channel, and then yanked over to the surround-back-left where a dog is barking. Then tyres screech around you and planes zoom overhead.

Precision is the key here, and the SC-LX87 is so spot-on we almost found ourselves glancing at the off-screen commotion.

It’s not just the location and panning of sound that impresses us. The Pioneer shows remarkable agility, throwing effects around with confidence and extraordinary speed.

You also get far-reaching dynamics, thanks in part to the sheer power on hand. Combine that with a big, open soundfield: it’s a convincingly immersive atmosphere.

This is helped by the sound’s insight, transparency and texture. In fact, you can close your eyes and still not be in the dark about just what is going on around you.

It’s not all about the action, of course. The Pioneer is more than willing to shift down a few gears. It’s as adept at low-key contemplation as it is with large-scale mayhem.

Speech, as with everything else, is delivered with precision. Words are enunciated clearly, never glossing over even the subtlest inflection.

You can add tonal balance to this extensive list of praise too. Last year’s SC-LX86 tended to edge ever so slightly to the bright side, but that doesn’t happen with the LX87. Here you get an even-handed approach to the frequency range.

The bass is taut and judged well enough not to be imposing. Treble is prominent, but rounded just enough to avoid sharpness.

The Pioneer even fares well against the Award-winning Yamaha RX-A3030. The LX87’s agility and precision are its greatest strengths, and here it has an edge over the Yamaha.

The champ counters with a slightly bigger soundfield, as well as a richer, smoother presentation.

We’d consider slapping a five-star badge on the Pioneer for its stonkingly good sound alone, but there are other elements to consider. You’d expect plenty of tech from a high-end amplifier, and the SC-LX87 impresses here too.

There are nine channels of amplification, each delivering 220W (last year’s SC-LX86 had 190W per channel). You get 4K pass-through and upscaling through the nine HDMI inputs, one of which is MHL (Mobile High-Definition Link) compatible.

This means it will accept 1080p video and surround sound from compatible phones. There are not one but three HDMI outputs.

The Pioneer is DLNA-certified, so you can play music from NAS devices and networked computers. AirPlay handles streaming from Apple devices, and HTC Connect does the same for select HTC devices such as the HTC One.

Spotify Connect is on hand for sending music directly to the amp from a device running Spotify on the same network too.

And you can also play music from iOS devices (Lightning or otherwise) and USB sticks through the front panel’s USB port. Supported formats include AIFF, WAV, FLAC, Apple Lossless and DSD.

There’s also an asynchronous USB input: you can plug your computer into the Type B USB socket at the back of the machine so you can use the Pioneer’s built-in DAC instead of your computer’s if you choose.

Stereo audio performance is very good for a surround-sound amplifier. It’s clear and detailed, with plenty of pluck and there’s a good degree of cohesion.

For digital audio, there are two each of coaxial and optical inputs. Analogue is well catered for, thanks to the smattering of stereo sockets and a full set of multichannel inputs. There are also four inputs for composite video and three for component.

An ethernet socket handles wired internet, and there’s a bundled adaptor for wi-fi. We’d stick to ethernet: it’s more stable and the wireless adapter is a bit fiddly. An optional Bluetooth adapter is available too.

This amp is a joy to use. The interface is easy to navigate, and updating it to the latest firmware version is a swift task. Setting up the speakers is simple, too: the auto-calibration process takes a little while, but it is thorough and accurate.

We love the Pioneer SC-LX87. It’s a multi-talented powerhouse with nearly everything we could ask for.

We’re deeply impressed by its precise, punchy sound and delighted by its host of features. If you’re in the market for a high-end home cinema amp, you must give this a listen.