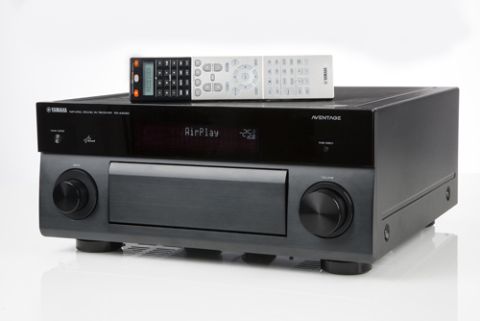 Best home cinema amplifier £1500+, Awards 2013. If you want big and powerful dynamics, then this high-end AV receiver will fill up your home cinema room with a stunning, cinematic scale of sound

Yamaha’s Aventage range of high-end AV receivers has always impressed us with powerful, immersive performances, and the new Yamaha RX-A3030 is no exception.

Packed with the latest tech and streaming features, this 9.2-channel amplifier would be a fantastic addition to your home cinema system, provided you have £2000 to spare.

And for that money, we’d wholeheartedly urge you to consider this showstopper of an amplifier. Combining powerful dynamics with an incredible sense of scale, the RX-A3030 is a wonderfully exciting listen.

It’s a warm and muscular presentation too, filled with rich tones and excellent detail retrieval. But what immediately grabs our attention is the huge soundfield – it really delivers cinematic scale.

Play the superb 7.1-channel DTS-HD Master Audio soundtrack of Iron Man 3, and the RX-A3030 makes an effortless show of its effects-steering talents. You’ll fully hear (and feel) the effect of multiple Iron Man suits flying and zooming all around you in the film’s climactic final battle scene.

Every crash and clang of metal zings thanks to an open top-end that never veers into brightness, while explosions have plenty of punch and a satisfying rumble to the reverberations. It’s a meaty, solid sound that puts fun and power at the forefront of its sonic signature.

The A3030 handles vaulting dynamics with great ease and subtlety, too, being as accomplished with big and loud special effects as with quieter moments and dialogue. Tony Stark’s killer one-liners and deadpan delivery are crucial to the film, and they sound clear, direct and expressive.

In taking that eager-to-please approach, Yamaha does sacrifice outright tonal neutrality and a touch of precision. While not lacking in agility, low frequencies are quite chunky. Slightly tauter bass with more definite edges would have delivered a better-punctuated impact. That’s our only quibble, though.

A staple of any Yamaha AV receiver is a multitude of surround sound programs. The RX-A3030 has 23. You have plenty of excitingly named modes, including Halls in Vienna, Munich and Amsterdam, which offer bigger, airier soundfields; and sci-fi and adventure modes that boost the bass to add more excitement and drama to the appropriate genre of film you’re watching.

While they aren’t strictly necessary if you’ve calibrated the AV receiver to suit your room and home cinema kit, the different sound effects are fun to explore.

As with any home cinema amplifier from any manufacturer, the Yamaha RX-A3030 isn’t quite as skilled when it comes to music. The muscle and power behind the amp (150W per 8 ohms) is the driving force behind an upbeat and dynamic sound, but it isn’t as cohesive and musical as a dedicated stereo amplifier.

But then a stereo amp can’t replay surround music. Listen to Michael Jackson’s This Is It and the Yamaha is happy to pound out the beats while having enough musical integrity to keep the likes of Billie Jean fun.

You can stream to the Yamaha via a wired or wi-fi link, using a variety of methods. It’s DLNA 1.5 certified, so you can stream most popular file types stored on a laptop, smart device or NAS box over your home network.

AirPlay support means you can stream songs from any compatible Apple device or iTunes-equipped computer, while Android users can stream HD content via a wired connection to the MHL (Mobile High-definition Link) port in the front panel.

The USB port also lets you charge and play from iPods, iPhones and iPads, as well as being able to handle high-resolution WAV and FLAC files up to 24-bit/192kHz stored on USB devices.

Internet streaming services come in the form of vTuner and Napster, and the Spotify Connect feature – which lets you send playlists directly to the amp – is a firmware update away.

The RX-A3030 gets its networking capabilities via a wired ethernet connection (and we recommend this option for stability), but you can add the YWA-10 wi-fi adapter (£80) to go completely wireless. Want Bluetooth? It isn’t built-in, but yet another accessory (the £50 YBA-11 adapter) is available.

You don’t get to be a £2000 AV receiver without having the latest features and a multitude of connections. The Yamaha can pass through and upscale to 4K Ultra HD across its generous eight HDMI inputs.

Support for 3D and 1080p upscaling also comes as standard, while the two HDMI outputs feature ARC (Audio Return Channel) for accepting audio coming back from the TV.

Other digital connections include four optical and three coaxial inputs, while there are analogue connections aplenty on the back panel. Folk with AV kit that doesn’t support HDMI are in luck, too – something that’s getting increasingly rare in amplifiers these days.

The RX-A3030 offers five composite inputs, four component and S-Video inputs, and ten analogue inputs. There are single outputs for all connection types as well (apart from a coaxial output). AM and FM radio tuners are also included alongside phono and headphone inputs, and an ethernet port is your ticket to wired internet connection over your home network.

The Yamaha RX-A3030 might look like the big, rectangular black box that has become the signature look for all AV receivers (and it is), but there’s more than meets the eye underneath that sturdy chassis.

Like its predecessor, the A3030 features a fifth foot alongside the normal four at each corner. Situated under the centre of the unit, this A. R. T. (Anti-Resonance Technology) Wedge is placed to damp vibrations throughout the structure.

Meanwhile, the H-shaped cross-member frame and symmetrical power layout inside all help to reduce unwanted electrical noise, chassis vibration and to isolate the channels – all of which adds up to delivering a purer, cleaner, and wider sound.

When setting up the receiver with the rest of your home cinema kit, we always recommend the following: run the receiver in for a couple of days (a weekend will be perfect), and then plug in the supplied mic and run the automatic calibration.

It takes just a few seconds to carry out all the measurements, and will ensure that the sound is optimised according to the size of your speakers and your home cinema room’s acoustic environment.

The RX-A3030’s results are fairly accurate, but we suggest dipping in to the manual speaker settings to double check.

We’ll leave you with one final tip, which is to let the amp run for about half an hour before you settle down for some serious film-watching. Warming it up gives a noticeably bolder, bigger and more dynamic sound.

The Yamaha remote control is, in many ways, just like its sound: big and hefty. It’s a long, rather heavy slab of a remote, with an array of buttons for nearly every function and navigating through the RX-A3030’s simple on-screen menu. Most importantly, the well-shaped volume buttons are easy to locate in the dark.

If your fingers are more comfortable with the slick interface of a smartphone or tablet, then the free Yamaha AV Controller app for iOS and Android is an essential download.

It’s particularly useful for selecting various inputs, with icons neatly laid out for each source. It also makes it easier to trawl through the hundreds of radio stations on vTuner or the folders stored on your NAS device.

Playing music stored on your smartphone’s music player is swift and painless, too, especially over AirPlay with Apple devices.

Choosing the various DSP surround modes is easily done with a tap on the screen, and there’s also scope to tweak the treble, bass and dialogue levels. It’s a simple yet organised app that’s worth a try, especially if you stream music from your smart devices.

Yamaha has yet again delivered a powerhouse performance with a comprehensively connected and feature-packed AV receiver.

The RX-A3030’s immensely enjoyable and involving sense of scale is justification enough for that £2000 price tag, while a class-leading ability to deliver any film soundtrack with subtlety, punch and agility demands your attention.

Some users might want more tonal faithfulness, but we’d happily accept the trade off in favour of a fun and immersive home cinema experience.