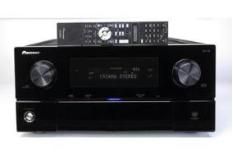 It’s big, beautiful and brilliantly balanced, but the Pioneer no longer sits at the very top of the pile

When Pioneer announced in February 09 that it was pulling out of TV manufacturing, many wondered what the company would do with itself.

Those people had clearly forgotten the breadth of Pioneer's business, which, along with car audio, includes excellent home cinema products like the SC-LX81.

This is a luxurious-looking unit, with its glossy, none-more-black fascia, clean lines and seductive blue light.

It's a big amp,, but that somehow adds to its impressiveness, which is only slightly hampered by a rather loose-feeling input selector.

More than just a good looker
Of course, the 'LX81 is far from a style-over-substance proposition, as its tech specs prove.

This receiver produces a whopping 190W in each of its seven channels, all of which also boast an ICEpower digital amp module.

Furthermore, the system has been fine-tuned with the help of London's Air Studios, and is THX Ultra2 Plus specified.

Where inputs and outputs are concerned, almost every base is covered.

The four HDMI inputs and two outputs should be enough for most people, and there's upscaling to 1080p and upconverting to HDMI.

It also has Pioneer's ‘Home Media Gallery', which means it will play music and photos stored on an iPod, USB device or your home network.

It'll also access internet radio using the Ethernet terminal on the back. Accessing these options is a fairly simple task, thanks to a smart Graphical User Interface.

This GUI also guides you through the auto-calibration, which is very thorough and pretty accurate, necessitating only a little manual fine-tuning.

In action, the Pioneer is brilliantly balanced and eminently listenable.

Superbly integrated sound
Both the tonal range and surround field are superbly integrated, so your ear is never distracted by bright treble, over-exuberant bass or a misplaced effect, even in the demanding robot battles on the Transformers Blu-ray.

That's not to say that the 'LX81 is inaccurate. Voices remain clear during frantic action scenes and individual bullets whizz right over your head; it's just that these don't detract from the surround presentation as a whole.

Switch to some stereo music and these sonic traits remain.

The soundstage is wide and extremely well-integrated, with vocals and instruments being clear and defined without ever drawing the ear away from the other elements – which is absolutely key at this level.

As gifted as the Pioneer is, though, it has a slight problem in the shape of its new Sony STR-DA5400ES rival, which has even more attack, depth and detail.