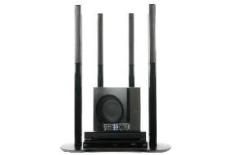 The Panasonic SC-BTT755 is no slouch; its efforts resulted in an Award in 2010. Like the LG HX995TZ, assembly is tricky – but the elbow grease is a small price to pay when you get to sit down and experience the Panasonic’s images and sound.

The streamlined speakers and subwoofer produce a full-bodied, natural sound, which keeps its cool even at higher volumes. Bass displays a level of quality and solidity that other systems struggle to replicate.

Explosions sounds powerful without the sub losing its cool; it also knits well with the other speakers, making for a consistent surround field.

Dialogue from the centre channel sounds crisp and doesn’t get overpowered by action coming from the left and right.

Spin some music and the BTT755 shows is quite musical for a system of this type. We’d opt for listening in multi-channel surround sound, as this lets the subwoofer help the speakers. They do sound a little bass-light when used in stereo.

The picture doesn’t disappoint. Edge definition in 2D and 3D is pin-sharp and remains stable during slow pans and frantic action.

Skin tones look realistic as opposed to ruddy, while black levels are solid but insightful enough to provide detail in shadows. And, although Blu-ray brings the best images from this system, the player is very good at upscaling DVDs.

Capable and well-rounded
Features are up to an acceptable standard, although you’ll have to part with additional funds for the wi-fi dongle, and you only get one optical input for accepting sound from other HD equipment.

The HDMI output is Audio Return Channel-compatible, though, so if your TV’s HDMI input is also ARC-enabled, you can enjoy terrestrial TV in surround sound.

There is an iPod/iPhone-friendly dock on top of the unit too, and you also get access to online content through Panasonic’s Viera Cast portal.

But, while the BTT755 isn’t bursting with features, it is easily one of the most rounded, capable systems around. With a potent mix of high-quality images and sound, the competition should be worried.