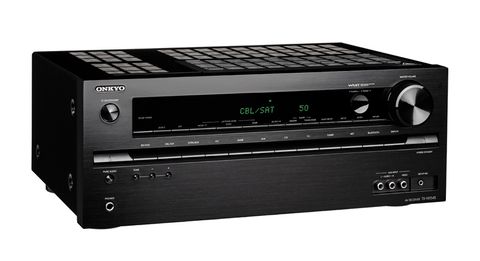 A well-featured, decent performing amp, but no class-leader

We took the recent success of the upmarket Onkyo TX-NR3030 (£2500) as something of a return to form for Onkyo, whose AV receivers hadn’t managed, until then, to set our hearts racing for some time.

As we head to the other end of the price spectrum, can the affordable TX-NR545 prove that times really are a-changing?

Among the first products to come out of Onkyo and Pioneer’s AV collaboration earlier this year, this 7.2 channel receiver certainly improves on last year’s TX-NR636, which fell by the wayside next to its competitors.

It does so, in part at least, with a feature that’s new this low down the range: Dolby Atmos, the latest surround technology that adds extra in-ceiling or up-firing speakers to create a more immersive, lifelike soundfield. Atmos brings a sense of height to the presentation, and sound effects travel around the room more organically.

Though Atmos was on the TX-NR636’s features list, it hadn’t been loaded at the time of our review, so it’s only now that we get to hear it from a budget Onkyo amp.

While some top-tier models can add up to four extra speakers, the TX-NR545 – like its rival Pioneer VSX-930 – is limited to two, forging a 5.1.2 set-up. Essentially, the Atmos-enabled speakers stand in for what would be sixth and seventh surround back speakers in a traditional 7.1 arrangement.

Set-up is as straightforward as it gets for products such as this. All the connections are clearly labelled and easy to find. Just wire up the unit, connect the supplied set-up mic and off you go.

Onkyo’s proprietary AccuEQ calibration software has thrown up some odd results in the past, but not in this application. It’s a relatively quick process, test tones taking no longer than it takes a kettle to boil.

Establishing a network connection by ethernet (our preferred option, thanks to its greater stability) or wi-fi wraps up set-up, allowing for streaming via Spotify Connect, DLNA, internet radio and AirPlay. Non-Apple users can also look to Bluetooth.

File support includes 24bit/192kHz and DSD 5.6MhZ files over a wired connection, while wireless is limited to sampling rates of up to 88.2kHz.

All six HDMI inputs are kitted out with the 4K-supporting 2.0 spec, while the first three are also HDCP 2.2 certified for compatibility with Ultra HD content. The HDMI out packs HDCP 2.2 too.

On the front panel, the USB and HDMI inputs found on last year’s TX-NR636 have been replaced by one composite video and a pair of stereo RCA inputs, joining a 6.3mm headphone output.

That aside, it’s hard to tell the two apart. You still get a solidly built box, available in either black or silver, that’s clean and orderly from front to back.

The user-friendly remote couples practical size with intuitive button layout, though we find Onkyo’s Remote 3 control app a good stand-in too. It’s pretty basic, but its responsiveness and easy-to-navigate interface makes it nice to use.

Menus are more functional than fancy, yet it’s hard to fault their foolproof simplicity. An additional bite-size, in-program menu lets you switch audio modes (to Music, Game or the one that gets our vote, Movie/TV), tweak bass, treble and subwoofer levels.

Now that the Dolby Atmos Blu-ray catalogue no longer begins and ends with Transformers: Age of Extinction, it’s not all about talking animated robots. We now have talking animated turtles too. Switching to a 5.2.2 set-up, Teenage Mutant Ninja Turtles shows off the surround format at its best in the ice mountain scene.

As cars and turtles somersault through the air, it’s tempting to cast our eyes a little above our screen where the sound opens up. The sense of movement is notably more pronounced than we’re used to, and sounds seemingly dance around your head.

Take the two Atmos speakers out of the equation and it’s surprising just how much you miss that additional information. It’s like switching off a film’s director’s commentary and missing all the enlightening tidbits.

There’s no denying Atmos enhances the experience – even with just two speakers. Unfortunately, all that can’t quite compensate for its sonic flaws.

The opening plane scene in Unbroken gives us over five minutes of unrelenting crossfire and we find each shot lacks the solidity and wallop afforded by its Sony and Pioneer peers.

There’s less detail too: you don’t feel that every movement in the cockpit is quite seeping through, and the urgency and exasperation of the men’s voices isn’t as well communicated.

Effects falling into the lower treble bracket lack a little refinement too, though overall we find the presentation nicely balanced, with no part given undue emphasis.

Certainly, there’s plenty of low-end rumble as planes explode, and treble has sparkling clarity and control as bullets splinter the glass. The mid frequencies pull through with lovely clarity and focus, too.

The Onkyo proves itself elsewhere too. Capable of decent punch and power, it attacks with determination and authority when required in the non-stop action scenes.

Its large-scale soundfield doesn’t struggle to fill our largest room, proving watertight too as planes blitz from one speaker to the next. Dynamically it stays on its toes, rendering shifts pretty well – though it isn’t as explosive or subtle as the class leaders.

Switch to music and the Onkyo is a fun listen. While it lacks the Sony STR-DN860’s richness and refinement, it revels in liveliness, agility and strong rhythmic drive. The Music Optimizer mode enhances clarity, but even without it there’s good focus and bite.

All-in-all, the TX-NR545 is a good option for those wanting to add Atmos to their existing set-up without breaking the bank.

Sadly for Onkyo, it’s not on its own in that respect, and is forced to surrender to its better-sounding competition.

Read all our Onkyo news and reviews here