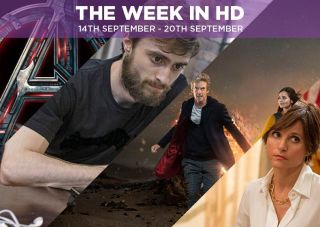 Liked the first Avengers? You'll love this too. It's not Marvel's best, but by Odin, it sure is fun.

So states our film review of Age of Ultron, and as the Blu-ray comes out, we're eager for a second viewing. Earth's mightiest heroes - this time more unified and given more equal screen time - have to fight off mega-robot Ultron and save a city from destruction. There's a lot that director Joss Whedon has managed to pack in - the newfound camaraderie between the Avengers, some excellent fight scenes, and a recurring gag involding Mjolnir - and fans are sure to love all the cameos scattered across the film.

It's an ambitious, exhilarating ride that makes you forget some underdeveloped plotlines - but hey, it's entertaining and sets up the next phase for the Marvel Cinematic Universe. Civil War, anyone?

Buy Avengers: Age of Ultron on Blu-ray at Amazon

Collectors v Mixologists. Two teams who lost in the first round of heats get another chance to reach the quarter finals.

But first they must find all the connections and missing vowels - tune in to find out who wins.

Privilege. We're mid-way through series five, and Jack Soloff isn't making life easy for anyone at Pearson Specter Litt - especially when he orchestrates the return of Daniel Hardman.

Meanwhile, Harvey's therapy sessions are getting somewhere, although his relationship with Dr Agard becomes complicated.

Daniel Radcliffe and Bill Paxton star in this BBC-produced drama about the behind-the-scenes battle surrounding the release of Grand Theft Auto.

Charting the game's inception in 2002 to GTA:V's record-breaking $1bn revenue in three days (making it the fastest-selling entertainment product in history), the film also looks at the cultural differences and controversy generated by the game, the creator behind it (Sam Houser), and the self-styled activist for American morality (Jack Thompson) who opposed the game.

Victorian. This week's challenges are all based on dishes and ingredients from the Victorian era - a period which gave birth to modern baking.

The bakers must first cook beautifully decorated game pies (stuffed with pheasants, pigeons, or other game animals), while the technical challenge is a recipe from the 1800s: not only do they have to make a fruit cake, their own sugar paste and marzipan, but also create a tennis court using royal icing on cake.

And finally, the showstopper is the charlotte russe cake: a tricky and intricate concoction of cream, sponge and jelly that has trouble setting and standing tall.

Joint Session. It's the series four finale and it's election night: will Selina and her bumbling team win another term in office?

The finale is directed by The Thick Of It's Chris Addison, and is the last episode to have creator Armando Iannucci as showrunner. Veep will return in 2016 for a fifth series.

After meeting Gilbert (a cynical and morose ghost who died in 1985 - played brilliantly by Alex Price), Annie sets out to investigate why she's trapped in limbo and what her unfinished business is.

While she solves her murder, George goes out on a date with Nina, and Mitchell has another run in with Lauren.

It's another installment of the comedy panel show, with Ed Byrne, Ed Gamble, Nathan Caton and Sara Pascoe as the guest panellists tonight.

Hosts England kick off the 2015 World Cup in the first Group A match against Fiji.

The Peace of Edmund Reid. It's the series three finale of this period detective drama, with the truth about the train robbery finally about to be revealed.

Meanwhile, the death of an American journalist in Whitechapel has repercussions upon its inhabitants, while Long Susan's diminishing business gets only worse when she has to deal with faces from the past.

The Magician's Apprentice. "Where is the Doctor?" When Earth's skies are frozen by an alien invader, the Doctor is nowhere to be seen. Where is he, and what is he hiding from?

Doctor Who is back for a ninth series, with Peter Capaldi and Jenna Coleman reprising their roles as the 12th Doctor and his companion. With new aliens, monsters, guest stars and even evil Missy (Michelle Gomez) returning in her gloriously cackling form, we can't wait to see what the next 12 episodes have in store for us.

Singapore Grand Prix. Night-time racing, street circuit, and in the shadow of the spectacular Marina Bay Sands Hotel - the Singaporean Grand Prix is one of the more dramatic races on the F1 calendar. Lewis Hamilton has a comfortable lead, but the Ferraris are causing trouble - in a good way.

Will the McLarens get hit by ridiculous penalties again? Will Maldonado crash again? And will the city's haze issues still linger as the lights go out?

Summer. Shane Meadows' This Is England series is back, with the four episodes focusing on '90's rave culture, the 1990 FIFA World Cup and more. In the second episode, the BBQs and raves are on as Lol, Woody and Milky enjoy domestic bliss.

The rest of the gang end up on a journey they'll never forget.