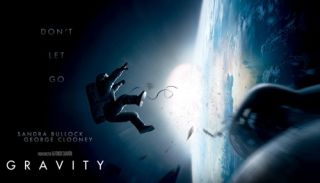 Also, check out our new Twitter account @WHFplaylist for the latest news and reviews of our favourite movies, music, TV shows and games, as well as tasty competitions that you can enter to win some shiny prizes.

Two astronauts are stranded in space after the destruction of a space shuttle.

It's a simple enough premise, but executed beautifully and terrifyingly by director Alfonso Cuaron and the superb London-based visual effects team Framestore.

With stunning visuals and even more superb sound (or rather, the absence of), Gravity blew our minds when we were lucky enough to catch it in the cinemas. It's a must-have disc.

We'll continue the space theme with this understated 2007 sci-fi thriller from Danny Boyle. A couple of decades into the future, the Sun is dying, spelling disaster for all life on Earth. A group of astronauts and scientists are sent out to reignite the Sun with a nuclear bomb the size of Manhattan, but as they get closer and closer to the Sun, the mission starts to take a toll on the crew and their sanity.

An elderly resident at a retirement home seems to have committed suicide, but the Saint Marie detective team think otherwise. Amidst murder most foul, Humphrey has to deal with his wife making a surprise visit to the island, hoping to give their marriage a second chance.

If you're still unsure about this gem of a show, we reckon the cheery, sunny trailer will change your mind.

The Diabolical Kind. The enigmatic Jamie Moriarty (played by Natalie Dormer) returns to cause havoc with Sherlock's emotions. When a young girl is kidnapped by Moriarty's former associates, the mastermind criminal is brought in to consult on the case. But Sherlock is wary that she'll use the chance to make her escape.

In a similar vein to BBC's QI and Radio 4's The Unbelievable Truth with a dash of Science Club thrown in, Sky's new comedy panel not only lays down some ridiculous facts, but also goes about trying to prove (or disprove) them.

The Understudy. Tony is the darling of the West End for his starring role in Macbeth, but his overbearing personality means there's no love lost between him and his fellow actors. It'd be a shame if something terrible happened to him, wouldn't it?

The Other Time. It's the episode that Suits fans have all been waiting for: the Donna and Harvey story. Flashbacks throughout the episode show Harvey hiring Donna, Harvey quitting the DA's office to join Jessica's firm, Mike's woes with higher education, Louis Litt being Louis Litt, and will we ever find out about the can opener?

Lavish drama about James Bond's equally charming and adventurous creator: Ian Fleming. The war is nearly over, but Fleming (played by Dominic Cooper) is convinced the Germans are hiding nuclear plans. He convinces his superiors to let him retrieve them before they fall into enemy hands, but comes face-to-face with renegade soldiers.

Meanwhile, celebrations are widespread in London, but what will Fleming do once the war and his wartime intelligence career are over? And will he and Ann (Lara Pulver) ever find a way to be together?

Disciple. When two corpses surface wearing Lanie and Esposito's faces, Castle and Beckett know they're on to a twisted serial killer who seems to be targeting police officers at the 12th Precinct. But what they don't account for is the return of a chilling and dangerous nemesis...

Everyone loves a bit of Hitchcockian thriller on a weekend afternoon. James Stewart and Doris Day are happily holidaying in Morocco when they get caught in the middle of an assassination plot of a foreign diplomat. Holiday: ruined.

Luther goes on the run after being suspected of murder. Determined to prove his innocence but also wanting revenge, he employs Mark and Alice's help in this nail-biting series one finale.

Here it is, the Top Gear Christmas Special...in March! So it's more of an Easter-ish special, but anyway: the boys are on a special trip to build a bridge on the River Kwai in Thailand. But to get there they must first cross Burma, a country that has been closed to Westerners for over 40 years. Their transport? Three lorries bought blind from the internet.

As the official BBC synopsis puts it: "What follows is an epic journey of beautiful scenery, regular adversity, ongoing malfunction, and the constant bickering of three badly dressed buffoons."

And this is only Part One.

Putting aside their differences and animosity, the honourable quartet must protect Cardinal Richelieu from danger, while dealing with a mysterious woman who really gets on Athos's nerves. We like her.

No, it's not the best of sequels, nor is it even close to being a decent end to a trilogy. Do I remember the plot? Of course not. What I do remember, and what it's worth rewatching for, is Ryan Reynolds's hilarious quips and comebacks throughout the film.

That, and the vampire pomeranian.

Morgan Freeman lets Jim Carrey be God while he goes on holiday.

A stunning, critically acclaimed drama about the Khmer Rouge in Cambodia in 1973. Bruce Robinson (the very same who gave us Withnail & I) adapted the screenplay, based on the real life accounts of a New York Times reporter, and a Cambodian interpreter who is captured by the regime.