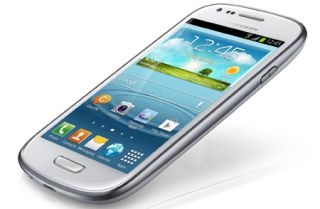 It's official, Samsung has confirmed this morning that its new Galaxy S III Mini smartphone will be available in the UK from November 8th with free content, including The Sims 3 and Bejewelled 2.

In addition, the Samsung Galaxy S III Mini gives owners access to the Samsung Video and Games Hub, as well as a 50GB Dropbox which is free for two years.

The S III Mini sports a 4in Super AMOLED screen compared to the S III's 4.8in display, with a lower 800 x 480 resolution.

The Mini is powered by Android 4.1 (Jelly Bean), has a dual core 1GHz processor, a 5MP front camera, Bluetooth and NFC.

Plenty of other features from the S III, including S Voice, which is Samsung's answer to Apple's Siri, and Smart Stay, which keeps the screen on as long as you're looking at it.

S Beam is also supported, allowing transfer of files between S Beam compatible devices simply by touching them together.