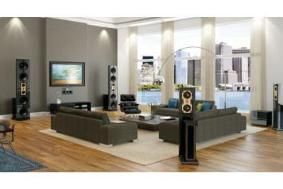 Steinway Lyngdorf launched the Model D Music system last year, and has now expanded its range to include the Model LS series and Model M series.

"We believe that home theatres around the world will migrate to high definition in both picture and sound, taking the market to a new level of excitement," says Steen Lohse, CEO of Steinway Lyngdorf.

The flagship Steinway Model LS Series has been created for "those who demand the ultimate in life-like home entertainment experiences". It's designed for very large rooms, and to that end uses floor-to-ceiling extensions of the line source speakers to provide "an effective and uniform coupling to the room".

For those with slightly smaller rooms (and judging by the pictures, we're still talking Manhattan loft apartment), the Steinway Model M series can serve as a flexible passive stereo or multichannel speaker system.

Both systems use Steinway Lyngdorf's Link system which maintains full high-definition audio resolution from source to speaker. And eight-channel room adaptation processing and bass management allow each system to be individually tailored to the room it's installed in.

Prices? If you have to ask, you can't afford it.