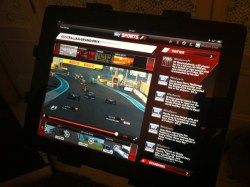 The Sky Race Control hub can deliver up to ten feeds of live content, accesible via the iPad app as well as via the red button for on Sky TV.

And for the first time, the first choice red button feed will also be available in HD, provided you have an HD subscription.

There will be a live social media bar pulling in content from Twitter, initially powered by the ScribbleLive platform though Sky is looking at integrating Zeebox, too.

The update for the Sky Sports for iPad app is set to go live on the Apple App Store in time for the first race, the Australian Grand Prix on the Sunday 18th March. The Sky Sports F1 HD channel goes live on Sky channel 408 on Friday 9th March.

The app is available free and, as with Sky Go, the content is dependent on your subscription, so you will need to take both Sky Sports 1 and Sky Sports 2 or the HD pack of channels to get Sky Sports F1 HD.

There's currently no option to buy access to the content on the Sky Sports for iPad app without a subscription to the relevant channels.

Sky told us it is working on an Android version of the Sky Sports app but couldn't put a date on when this, or a similar version for iPhone and iPod Touch, might be ready.

We also got a sneak preview of multi-screen viewing on the Sky Sports for iPad app, allowing you to view a number of feeds simultaneously on the iPad.

This element of the app is in development but is expected to go live and be available later this F1 season.

David Croft, Sky's new F1 commentator, said it was about "letting the viewer be the director".

The Sky Sports for iPad has also had a redesign, with a new look to the main hub of sports content. All the changes will go live in the update, which is currently going through the Apple approval process but is expected to be live any day.