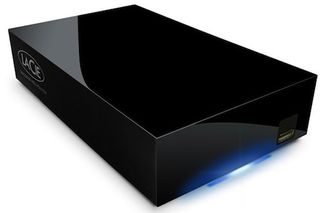 The ability of British retail to shoot itself in the foot never ceases to amaze.

While high-street and out-of-town retailers face an ongoing threat from those with no 'bricks and mortar' presence, for many purchases it's becoming increasingly difficult to justify hitting the shops unless you really must.

Decided on Friday that I was going to spend the weekend sorting out the home network, installing an extra NAS drive as a back-up for my main one, and generally tidying up the rat's nest of Ethernet cables.

(Well, my wife's away with friends, and the weather forecast promised rain and more rain, so I could actually get everything disconnected and sorted without being asked 'When can I listen to…?' or 'When can I watch…?' at regular intervals. Without such huffage, all should go swimmingly, yes?)

Trouble is, I'd left it too late to order another NAS drive online for Saturday delivery, so the only recourse was a spot of 'click and collect', simply because – due to the ongoing effects of last year's floods in the Far East – supplies of such devices seem to be a bit rocky at the moment.

Having chosen several models only to be shown they weren't in stock anywhere local – one leading retailer, asked to show me the outlet nearest to Teddington actually holding my desired device, suggested Glasgow – I finally found not quite the model I really wanted at a branch near to my home.

One 2TB LaCie Network Space 2 drive it was, then.

Click, reserve, collect, and pay on pick-up: you go to the dedicated counter, where your purchase is waiting for you, put aside on special shelves, pay, and walk out whistling a merry tune. Couldn't be much simpler, could it?

So why, well-known computer/consumer electronics retailer apparently dedicated to Global Political Correctness, did I rock up to your store and present my order number, only to have one of your staff wander off to the all-but-empty bay out on the shopfloor dedicated to NAS drives and stand there looking bemused?

Why, Constable Earth, did your employee then vanish through a door behind the scenes, only to come back five minutes later and say 'Sorry, sir, there seems to have been a computer error' – great excuse, in the circumstances – 'and we're actually out of stock of that unit'?

OK, so I'll have something else similar, then. 'Sorry, we don't have anything of that type in stock at the moment.'

Hmmm – weekend re-networking plans unravelling, I got on the phone back in the car, located the unit I wanted at another branch some dozen miles away, clicked, reserved, and set-off to collect.

Act Two: In Which The Problem Is Solved

You'd have thought I might have known better by this point, but the result's not going to be the one you're expecting. Branch Two had the unit and – apart from supreme disinterest when I told the salesperson in passing about my experience with Branch One – the transaction was concluded in short order.

Saturday morning dawned chill and bright: perfect weather for re-cabling! So, after an hour or two of re-routing wires, time to unpack the new drive, hook it up and configure it.

And that's where it all kinda unravelled: for a start, I noticed there was no plastic wrapping around the drive inside the box, the UK three-pin adapter was fitted to the plug-top power supply, and the power cable was wrapped round the body of the power supply. Hmmm...

Act Three: Nothing New In That...

The slightly crumpled 'get started' manual says that, when first accessing the drive, you install the LaCie Network Assistant on your computer, click its icon, locate 'NetworkSpace2' and choose 'Web Access'. So I extracted the disc from its seemingly dog-eared envelope – hmmm again – and did just that.

Except there was no sign of 'NetworkSpace2': instead, there was 'A-Spec-HD'.

Click that, choose 'Web Access' and there was a log-in screen. Simple, right? The manual says it's the usual 'username: admin, password: admin' routine to get started.

Erm, no – the drive wouldn't even accept the username, let alone a password. Clearly the unit had been used before, re-packaged and then re-sold as new. And I couldn't even reset the drive to factory defaults, as to do that you need to log-in as an admin. Which of course I couldn't do. Grrr…

Back in the car for the 20+-mile round-trip back to the Planet of All Things Computer, missing not watching the F1 qualifying to drive through bucketing rain in a state of near incandescence.

I think I described the problem to the hapless assistant on the end of both barrels of my anger in a relatively calm fashion, though I did hear myself use the terms 'disgusting', 'deception' and 'illegal' somewhere in there.

To be fair, the assistant, who'd been dragged from the repair department to serve me did agree – but after much examination of the contents of the box, shooting of barcodes and tapping on the computer, he confirmed that I'd bought the last LaCie 2TB drive they had.

Fortunately I was one step ahead of that, and before leaving the house had checked the shop's stock online and put my marker on a 2TB Iomega (left) it did have in stock.

Informed of this, this assistant again went to look for the product on the shelf – why, when you reserve and collect, isn't the product taken off sale as the website says it will be? – and came back with it.

Again, more tapping of keys and shooting of barcodes, and the announcement that the new one – which I'd already checked was in a factory-sealed box – was £30 more expensive.

Could I give my address for the exchange, please?

At which point, dear reader, I'm afraid I was sufficiently grumpy to hand over one of my What Hi-Fi? Sound and Vision business cards, and miraculously the price difference vanished 'because of the problems you've had'.

I'd like to think a 'civilian' would be treated the same way – but then I'd also like to think the company, with its variety of familiar high-street brand-names, will get its act together when it comes to operating its Reserve & Collect service as it should.

And more to the point inform its staff that it's simply not acceptable to put products that are used, returned or whatever back on the shelves and sell them as new.

If it doesn't sort these failings, the minor annoyance of waiting in for a delivery, or the fact that Amazon's logistics company seems to think that delivering to the office at 7.45pm constitutes a 'next day' service, won't seem too much of a hardship. And that means even more sales will be lost to the world of 'physical retail'.

Now my only hassle is the several days the drive currently says it's going to take to back up around 1.2TB of music from my main NAS unit.