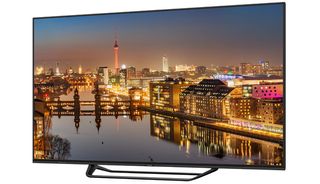 Considering Sharp’s 8K panels have been popping eyes on show floors for a few years now, and are already available in China and Japan, it was about time the brand finally brought the technology to the European market.

MORE: 8K TV - everything you need to know

Thing is, the LV-70X500E doesn’t have a TV tuner. Instead, the monitor has eight HDMI inputs through which content can be played. There are four standard 4K ports, with the other four able to deliver a native 8K signal.

Still images in 8K can also be viewed from a USB stick.

As it will be some time before we see 8K content, it makes sense that the LV-70X500E has a processing engine to upconvert less-than-native content. Sharp claims the image is not merely ‘blown up’ but ‘visibly enhanced’. Samsung is also working on an intelligent upscaling algorithm for its 8K AI TV due later this year.

Capable of 79% of the colour-gamut standard BT.2020, the 8K panel has direct backlighting and supports High Dynamic Range (HDR) through both Hybrid Log Gamma (HLG) and HDR10.

8K may still at the pie-in-the-sky stage but, whether we're ready for it or not, the 'next-gen' TV is at least starting to make waves.

The 8K TV state of play, according to LG, Samsung, Sony and more​