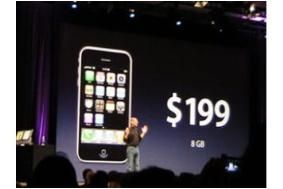 It adds 3G capability, has built in satellite navigation, and will sell for just $199 worldwide for the 8GB version.

It goes on sale on July 11, and will be much more widely available than the old one - it'll be on sale in 70 countries over the next few months.

The new iPhone also claims much faster downloading of web pages, as Tom Dunmore of Stuff magazine reported from the announcement in San Francisco.

it was shown downloading a graphics-heavy web page, this taking "21s in 3G and 59s on EDGE. Wi-Fi was 17 seconds. The iPhone is 36% faster than the Nokia N96 in downloading a website."

UK availability is yet to be announced for the phone, but some stores are apparently already suggesting August 8th.

UPDATED: Looks like it's coming to the UK on July 11, according to some online reports.