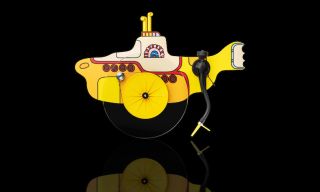 Pro-Ject now has as many turntables themed around The Beatles as there were band members, with the latest easily the most distinctive yet.

The Yellow Submarine is a belt-driven, and indeed yellow-coloured and submarine-shaped, turntable that follows in the steps of the 1964, George Harrison and two Sgt Pepper decks to celebrate an era or occasion of the British band. And we don’t have to tell you which album is being commemorated here.

It ties in with this year’s release of Yellow Submarine in a 4K restoration to mark the film’s 50th anniversary.

While we are awaiting details on availability, we do know that the Pro-Ject Yellow Submarine is priced £389, with a dust cover an optional extra.

High-definition vinyl: coming soon to a turntable near you