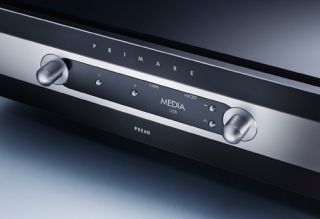 Swedish audio manufacturer Primare has announced its return to the high-end music system market with the launch of its new PRE60 preamplifier and A60 power amplifier, which we first saw unveiled at the Bristol Show 2014.

The company said its new Reference 60 series – available from July – brings together its "traditional build quality and analogue circuit design with the finest digital processing".

Housed in a heavy gauge alloy steel chassis, the PRE60 (£6500) has been designed to "complement all high-end power amplifiers" but is primarily a companion to the A60.

One of the most notable features of the new preamp is that it supports high-resolution audio streaming up to 24-bit/192kHz from online, network attached and desktop sources.

A digital audio input lets you connect a CD player, smartphone and similar devices, while there are a range of alternative inputs – including two balanced XLR and four RCA.

Other features include two pairs of RCA and balanced XLR outputs; a record output; an OLED display and a remote. It can also be controlled via an iOS and Android app.

MORE: Read all our preamp reviews

The A60 (£6500) is billed as a "reference audiophile, fully balanced 2 x 250W UFPD" stereo power amplifier. It houses four amplifiers – two per channel – in a balanced configuration.