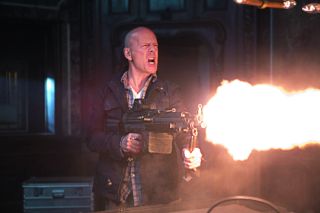 A Good Day To Die Hard

Yippee ki-yay? Call it a day…

Bruce Willis looks unbelievably bored in the latest Die Hard. And you’re likely to feel the same way. The series is now so removed from its roots that the studio could pay just about anybody to blow things up for 97 minutes and slap a Bruce Willis sticker on it.

This latest adventure has John McClane going to Russia to be casually racist while looking for his estranged CIA agent son. No, we didn’t know he had one either.

We’re supposed to ignore this and focus on the action, which takes up the majority of the show. But is anyone that impressed by explosions nowadays? There are so many gunshots, car crashes and generic breakages that it’s hard not to become rapidly desensitised.

Boredom is not an appropriate reaction to large-scale mayhem, and yet it is inevitable. The story emerges only halfway through and even then there’s no justification for the tedious amount of chaos. A similar effect could be achieved by drinking a pint of espresso and watching YouTube clips of some toddlers trashing their toys.

Can McClane save the day?

The only one who could salvage this mess is surely the iconic John McClane, who gets through really bad days with reluctant tenacity and sardonic charisma.

But he is now an obnoxious shadow of his former self, who thinks it’s fine to punch a civilian in the face and steal his car.

He also spends most of the film mumbling about being on vacation and lets John Jr. do most of the heavy lifting. That’s not John McClane, and this is not Die Hard.

The film’s not much of a looker, either. Colours are bland, and there’s a grainy quality to the picture that would be more appropriate in the next Kathryn Bigelow desert movie.

The cinematography is of the hyperactive variety, with liberal use of shakycam, snap zooms and attention-deficit editing. It’s a good test of your system’s grasp of motion, if you really feel the need.

The audio side of things is more encouraging – the DTS-HD Master Audio 7.1 soundtrack is a good workout for your system. Flying bullets and crunching cars provide a good test of stereo image and detail resolution.

Really, it’s hard to see the point. There is no shortage of alternatives that are more worthy of your system and your time. The series has hit rock bottom harder than a money thief falling from Nakatomi Plaza. It’s time to call it a day.

What’s on the disc

- Making it Hard to Die

- Anatomy of a Car Chase

- The New Face of Evil

- Ultraviolet copy of the film

A videogame bad guy has an existential crisis and decides to leave, moving to another game in the arcade.

It’s a bit like Toy Story, where inanimate objects come to life when humans aren’t looking – only with pixels. It also has an element of Tron, where everything is a program and is susceptible to viruses or, even worse, getting unplugged.

Street Fighters go for a drink after a hard day’s work; villains from Mario, Sonic and Pac Man hold councelling sessions and visit each other’s worlds via electric currents.

It’s a cute scenario, likely to bring a smile to the face of anyone who has ever loved videogames, but those who grew up in the 1980s will get even more of a kick.

It gets a bit predictable at the end, but ultimately it’s an entertaining and shamelessly nostalgic romp through retro geek culture.

Being a Disney animation, it’s no surprise that it’s full of colourful eye-candy, which rivals the best of Pixar. It sounds lovely too: there’s something special about listening to 8-bit effects through 7.1 channels of DTS HD Master Audio goodness.

It’s a truth widely acknowledged for the best part for 40 years: a disco-ish, 110bpm tempo, on-the-one handclaps and Nile Rodgers’ peerless rhythm guitar playing makes the sun shine. Given Random Access Memories’ increasing ubiquity, we should be in for a heatwave.

And Random Access Memories’ Studio 54 authenticity is further bolstered by its gloriously live feel. On all but two tracks, drums are provided by legendary players John Robinson and Omar Hakim; there are vocal contributions from Pharrell Williams (on the classic-in-waiting Get Lucky, as well as the even Chic-er Lose Yourself To Dance), Julian Casablancas and Giorgio Moroder among others.

Throughout, the sound is high-gloss, smooth and absolutely impeccably played. In terms of timing, stereo focus, low-frequency depth and speed, dynamics and midrange fidelity (this album is dripping in vocoder), RAM is the sort of recording that will let a good set-up shine and leave a so-so system to flounder – particularly on vinyl.

Despite a radio-friendly level of compression, RAM is still an expansive and painstakingly realised collection. And if you haven’t heard it everywhere yet, don’t worry – you will.

Standout track Giorgio By Moroder. Nothing less than a History of Modern Dancing.

For all the stylistic gadding about, the restless shape-shifting and periodic upheaval of personnel, there’s always been an immovable central point to the Deerhunter template: The Song. From 2005’s debut Turn It Up Faggot to 2010’s gleaming, soft-focus Halcyon Digest, The Song (hooky, melodic, built to last) has always been at the forefront.

And so despite Monomania being a hissier, scratchier, more gratuitously misshapen proposition than any previous Deerhunter release, The Song is always lurking just beneath the grimy surface, always poised to reveal itself like a pearl inside a particularly grotty shell.

From the overdriven rhythm’n’ bruise of opener Neon Junkyard through the pretty, purposeful The Missing to über-confessional Nitebike (which manages to be grittily distorted despite being a minimal single-guitar-and-voice affair), Monomania is a high-class, lo-fi collection of literate, personal songs with a definite garage-rock bent.

The vibe is something like The Ramones fighting with David Bowie on Bo Diddley’s front porch.

Consequently Monomania places some very specific demands on your system. Details may be buried beneath the scuzz, but they’re there to be revealed, and this rather compressed recording requires a rocket up it if it’s to have any worthwhile dynamic range. Overly polite set-ups need not apply.

Join us on Spotify tiny.cc/playlist2013

Currently in contention for best album of 2013 with April’s Supermigration, Solar Bears likes a good stomp.

Be-bop just doesn’t get any boppier. Exhilarating and exhausting (and with an absolutely demonic vibes solo).

Part Weimar cabaret tune, part feverish interior monologue, Hot Knife is the sound of unhealthy desire – and compelling with it.

Friend & Lover: Reach Out In The Darkness

“I think it’s so groovy now that people are finally getting together.” Obviously hippy nonsense, but you WILL want to dance.

The Last of Us

The zombie apocalypse as envisioned by the team behind Uncharted. It’s dark and melancholic, with plenty of desperate action and a great central relationship between your character and the teenage girl he’s charged with protecting. And it’s probably the best-looking game ever to hit PS3.

Cult hit Metro 2033 warranted a sequel. It’s just a shame that in order to entice a wider audience some of that niche appeal has been lost. It’s got decent scares, nice atmosphere and solid action, but generic first- person shooter tropes have snuck in, making this less of a must-play.

A standalone spin-off from Far Cry 3 (meaning you don’t need the original game), Blood Dragon transports you from a tropical island to an ’80s-style future dystopia of neon lights and dragons that shoot lasers from their eyes. It’s as much fun as it sounds, more than worth the £10ish price.

Injustice: Gods Among Us

One-on-one fighting games are a bit old-hat now, but if you’ve ever had much love for the genre you’re going to enjoy Injustice. The story mode, which comes up with great reasons for superheroes to bash each other’s heads in, is fun, and the combat’s solid for serious battles with friends.

What we are waiting for…

World War Z (21st June) Plagued by a series of rewrites, this looks to be a disaster. But we have a soft spot for zombies, and this looks suitably epic.

And don't forget to check out the Week in HD for the best on the box in high definition.