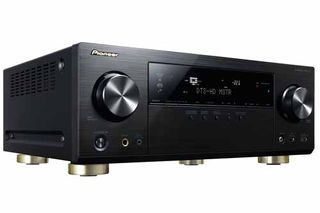 The VSX range incorporates a number of features previously only seen on Pioneer's SC models, including compatibility with Android and iOS versions of the Pioneer ControlApp and iControlAV2013 apps. There's also Pioneer AVNavigator app, which offers set-up guides for users.

Both also offer HDZone, a Zone 2 HDMI out for routing either the same signal as the main zone or a separate source to a second zone via HDMI.

These top two models, and the 7.1-channel VSX-828 and 5.1-channel VSX-528, have an MHL 2.0 input for playing audio and video from smartphones and tablets.

The top three models allow music playback from all versions of iPad and are able to display album art and metadata when connected to a TV or monitor. The receivers will also charge connected iPhone, iPad and iPod devices via corresponding cables, including the new Lightning or 30-pin cable.

The 5.1-channel VSX-423 and VSX-323 AV receivers complete the range. All six models have 4K passthrough, while all six can play music from Apple devices in some form or other though only the top four models have Apple AirPlay for wireless streaming.

All the new Pioneer VSX receivers also have a new ECO Mode that Pioneer claims allows you to manage and reduce power consumption while still maintaining audio quality.

The ECO Working and ECO Stand-by modes, plus other settings, can be controlled from the remote control, the ECO Manager on the iControlAV2013 app, or the front panel of the receiver itself.

All six new Pioneer VSX AV receivers are scheduled for release from June 2013.