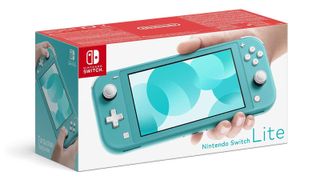 With much of the planet in lockdown, there's never been a better time to invest in home entertainment – and the world knows it. Nintendo Switches are sold out everywhere. That's why many are turning to the Lite version, which is just about still in stock and with bundle deals.

This is the cheaper, handheld-only version aimed solely at playing on the go on its 5.5-inch screen. It's compatible with the standard Switch and other Switch Lites.