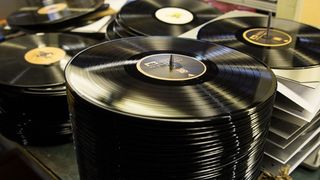 With sales in 2016 at a 25-year high, vinyl is well and truly back. But there's one problem: most of the machines used to make the records are ancient, and haven't been updated since the format was supposedly at death's door.

The technology is struggling to keep up with the resurgence in demand, meaning artists have to wait up to a year before they can release their music on vinyl.

But Toronto-based Viryl Technologies is producing a new pressing machine system called WarmTone. Modern engineering techniques make it both more reliable, and easier to switch out 'stampers' (the negatives that press records). It also has a trimming/stacking system that's better equipped for handling large-scale production.

The machines are controlled by touchscreens, and have onboard sensors that monitor a range of variables throughout the process, including pressure, temperature and timing, and will alert staff if something is amiss.

Only one machine is currently in use, but Toronto-based CD and DVD manufacturer Microforum should have one up and running by the end of the week, according to CBC News.

While production still takes eight to 10 weeks, Microforum eventually hopes to have six machines running at once, knocking out 24,000 records a day. Which could mean no more long waits for albums to be released on vinyl.

It's not the first new-fangled shot at producing vinyl. Last year, a patent was filed for 'HD vinyl', which claimed to "double the audio fidelity of a typical LP". Dutch company Symcon said it would speed up the process by switching to injection moulding.

All in all, it's an exciting time for fans of vinyl.

MORE: You can play vinyl with the new £5 note but probably shouldn't