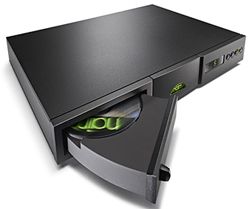 Just in case you thought Naim 's new product launches were all about network music players these days, it's today announced a new entry-level player, the CD5si.

Selling for £995, the new player – which will come as great relief to sub-editors constantly having to remember the italic in the name of the CD5i it replaces, in order to set it apart from the CD5i that replaced! – looks exactly the same as the outgoing model, but features significant changes 'under the hood'.

The CD5si has an a new transport mechanism, designed for improved consistency and longevity, and this is mounted in the latest version of Naim's swing-drawer tray which, the company says, gives it 'the ideal low resonance, stable platform on which to operate'.

The digital to analogue conversion is changed, too: the new player uses the Burr-Brown PCM 1793 DAC, based on the same architecture used in Naim's network players but optimised for CD, rather than having to deal with the many sampling rates of streamed content.

There's also a new higher-precision clock, further reducing jitter, while an improved analogue output filter combines with the new DAC, Naim says, to give a tenfold reduction in distortion.

Finally the power supply voltage has been increased, for greater linearity in the output signal.

Naim says that 'Some may wonder why [we] should use such a large amount of R&D resource on what is perceived as a dying market. Reducing maybe, but dying certainly not, and in some markets sales of CD players - out of the truly budget categories - are growing.

'We in the UK live in a very "early adopting market" and sometimes, because of this, have distorted views on the world’s markets. Some markets are moving much more slowly towards music streaming than others and for those ‘less speedy’ markets an improved Naim entry-level CD player makes huge sense.'

The CD5si is now shipping.