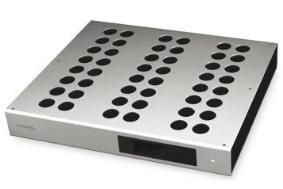 The new RackMount models will be available as dual-rack-space (2U) designs for Sooloos's Source, Twinstore and Ensemble devices.

While retaining the core features of their standard counterparts, the RM models also include several upgrades, including internal fans for heat dispersion and a front-panel power switch for easier installation.

"Custom installation remains the core of our business," says Sooloos chief operating officer Peter Wellikoff. "We felt it absolutely necessary to support the installers, not only by providing rack-mountable options, but also to produce these products at no additional cost."

The Source:One RM and Source:Five RM serve as the hub of a Sooloos system, and provide the audio outputs for connection to a stereo or audio distribution system.

The Twinstore RM is a network attached storage device featuring two removable hard-disk trays: one for primary storage, one for backup.

The Ensemble RM combines the functions of the Source and Store components in a single chassis. It has a 1-terabyte removable hard-disk tray for storage, and has analogue and digital outputs to feed up to five discrete zones around the home.