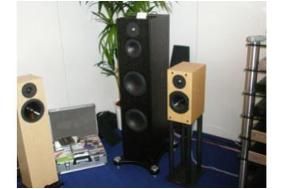 Set to sell for around £5000 a pair, the 1.2m-tall speaker has been under development for the past three years. It's deeper than it's wide, and has separate internal enclosures for bass, midrange and treble sections, while the crossover is in a sealed housing in the base.

This crossover has switchable links to enable the frequency response to tailored to different positions and room sizes, and sister company Creek plans an optional active crossover module for the speaker, buypassing the internal circuitry.

The Encore 50 uses a specially developed 25mm tweeter: based on the Epos Mi tweeter, this has an anodised aluminium dome, with extensive damping both of the driver itself and the chamber in which it's mounted.

The midrange unit has a 15.8cm Kevlar cone, as do the twin 22cm woofers. The bass units couple acoustically at lower frequencies, Epos says, and are tuned using a single 9cm diameter port to the rear.

The Encore 50 should go on sale later this year.