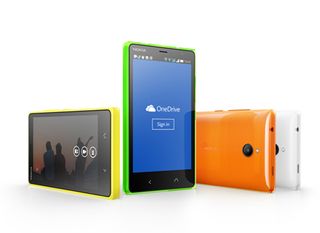 US computing giant Microsoft has broken new ground with the unveiling of its first Android-powered smartphone – the Nokia X2.

At a cost of just €99 (£80), the new device is being targeted at the affordable end of the smartphone and will "introduce the next billion people to mobile internet and cloud services".

It's also the first smartphone to be announced by Microsoft since it completed the £4.6bn acquisition of Nokia's mobile phone division in April, expanding the existing Nokia X range.

The features include a 4.3in ClearBlack display; a 5MP rear camera; and the next-generation Nokia X Software Platform 2.0, as well as a dual-core Snapdragon 200 processor.

Microsoft says the Nokia X2 will also act as a "gateway" to its services including Outlook.com, Skype and OneDrive, with 15GB of free cloud storage available through the latter.

It'll be available in three finishes at launch next month [July] – glossy orange, black and green, while glossy yellow, white and matte dark grey will be added to the line-up later.